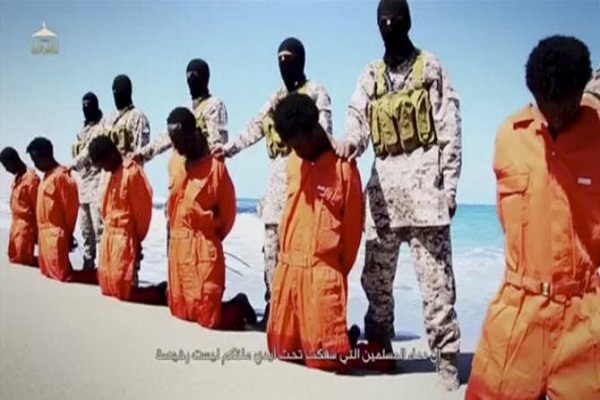 Titled “Until There came to Them Clear Evidence”, the 29-minute video released by the Islamic State’s media arm, Al-Furqan Media, shows both groups – each group has 15 captives –in orange and black jumpsuits being killed at different locations in war-torn Libya.

The two groups of men are described by onscreen text as “followers of the cross from the enemy Ethiopian Church.” The Islamic State, formerly known as ISIS or ISIL, said one group was being held in eastern Libya and the other in the south of the country.

The footage shows both groups of captives being killed by the terrorists, one group is beheaded and the other is shot dead.

In the video, an Islamic state fighter threatens Christians must convert to Islam or die.

“All praise be to Allah, the Lord and cherisher of the world and may peace and blessings be upon the Prophet Mohammed. To the nation of the cross, we are back again on the sands, where the companions of the Prophet, peace be upon him, have stepped on before, telling you: Muslim blood that was shed under the hands of your religion is not cheap,” the narrator says in Arabic in the video, according to CNN.

“In fact, their blood is the purest blood because there is a nation behind them (which) inherits revenge. And we swear to Allah: the one who disgraced you by our hands, you will not have safety, even in your dreams, until you embrace Islam,” the narrator continued.

In February, the Islamic State released a video of 21 Coptic Christians from Egypt being executed in Libya.