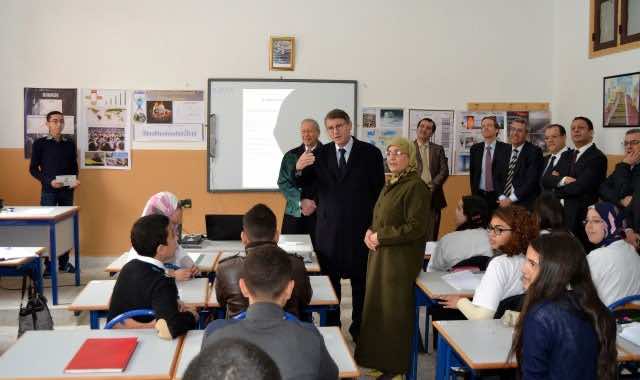 Marrakech – Today, no one sane would dispute that education is the very heart and backbone of real development. Analysts and experts worldwide believe that the economy, health, justice, and education are at the top of the list of the criteria when ranking countries in terms of development. In other words, if one wishes to know which countries are more developed, they only need to compare the previously mentioned sectors.

Upon a closer examination, however, one would easily notice that these sectors: education, health, economy, and justice; are not of equal importance to the process of development. Education tends to dominate any other field, because it is the factor behind their creation, analogically playing the role of the mother in the family. In order to train and qualify a particular person to be a judge or a doctor, one would certainly need a teacher, but the opposite is not valid. Democratic and developed states throughout the world have come to understand this equation. They have no doubt that education is the key and the solid foundation for humanity’s progress. Taking the prior arguments into account, it becomes only logical when one goes through statistics about high-paying jobs in countries such as Germany, Canada, or Japan to find out that teachers enjoy a very high position in the list.

In states ruled by dictatorships and corrupt governments, however, the picture is upside down. The best example for such countries may be the Arab world, and Morocco is no exception. In Morocco, people in charge of development, intellectuals, and officials quite understand the situation and see the whole picture, but, for various reasons, prefer to turn a blind eye. The government and state officials appear to operate for a different reason: a corrupt reason, shadowed by a flexible conscience. It is here and only here that education is the eternal enemy and necessary evil. One finds a great deal of fortune and relief in the fact that the United Nations and the global community wouldn’t accept dealing with a state that has no educational system and no schools, otherwise, this would have been the case in Morocco.

During the last four decades, Moroccan decision-makers have done whatever has been necessary for their survival. After the independence, they practically understood that some literacy is crucial for the country to operate. However, real education could not to take place in a corrupt political atmosphere if the manipulation of the people was to remain intact. Taking these reasons into consideration, it makes perfect sense when one looks at the incomes ranking in Morocco and finds teachers at the very bottom of the list. With great success, rulers have managed to make the most noble calling one of the least respected and desired occupations in the country, to the extent that in many situations being called a teacher stands as an insult and is the subject of many Moroccan jokes.

No rational person on Earth would dispute that what’s happening in Morocco is wrong and that the country is absolutely heading in the opposite direction of development. Nevertheless, a given situation, no matter how bad it is, can always get worse. In our case, it is the highest educational authority in the country. The highest education official in Morocco gives one a very colorful and clear image of the depth of corruption and selfishness in the country. The Minister, Rachid Belmokhtar, can never objectively tackle and examine the issue of education, because he would inevitably come to the conclusion he already knows: that he, as the head of the Ministry, is the real hindrance. All the former officials that have held his position have had a knack for avoiding responsibility. At the time, one would get the feeling that there is a problem, but no one was able to provide a diagnosis and put their finger on it. They have implicitly conveyed that they have no clue whatsoever of what’s wrong with our education system.

Mr. Belmokhtar, however, is no ordinary Minister. He insisted on holding teachers guilty and responsible for the catastrophic situation. He was systematic, and achieved his objective through a number of steps. First, he launched an aggressive attack on teachers in the mainstream media, making them seem like wild beasts wandering through the land and making them feel that they are unworthy of the profession. Second, he took the trouble to appear a number of times in public events disgracing and accusing teachers of instructing nonsense to students. Third, he used his authority to generate new school laws and regulations that grant unhealthy freedom to students, which would only worsen the situation and consequently lead to a disaster in the foreseeable future.

Eventually, as a Moroccan citizen and practitioner in the field of education, I really believe that it is high time we start being honest with one another. Shirking responsibility will not take us any further. It will only buy the corrupt some time. Furthermore, one must begin at the beginning and ask oneself is it acceptable for the senior official in charge of improving education in the country to not be able to speak the country’s official language without making countless hair-raising mistakes.

In short, I would like to urge the Minister to reexamine his views and logic for the simple reason that teachers in Morocco, just like the students, are victims, and victims cannot be perpetrators. I would also like to remind him that the Ministers’ chair is not an opportunity to strike deals and make fortunes, nor is it a symbol of prestige that elevates one above his friends and relatives, nor is it a grant of luck that tells its holder how special he or she is. It is a heavy burden and responsibility, followed by the judgment by history, and by God, eventually.