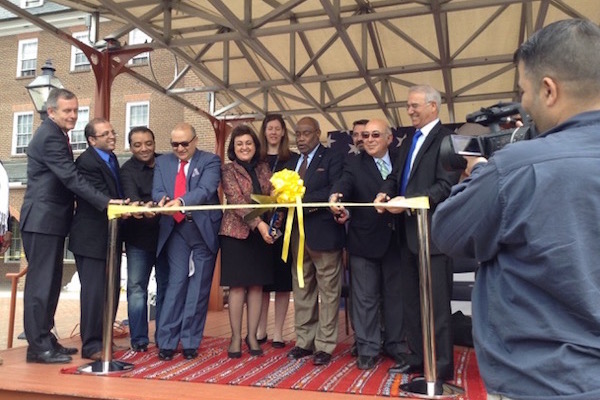 With plenty of hot Moroccan mint tea in the offing, and marked by an impressive delegation of government officials and dignitaries, the Festival kicked off at noon with a ribbon-cutting ceremony featuring welcome speeches by City of Alexandria Mayor Bill Euille, Morocco’s Minister of Handicrafts, Solidarity, and Social Economy Fatima Merouan, and Morocco’s Ambassador to the U.S. Rachad Bouhlal.

Celebrating the long standing diplomatic relationship between Morocco and the U.S., a full ROTC Honor Guard of students from T.C. Williams High School marched in and presented side by side the U.S. and Moroccan flags, while the national anthems of both countries were sung, Morocco’s by Mohamed Ziyat who travelled here from Morocco with his wife especially for the festival, and the U.S.’s by Marchelle Toliver.

Moroccan Gnawa and fusion star Hassan Hakmoun offered a wonderfully unamplified acoustic musical presentation on sintir and vocals, while jellaba-clad members of his band danced to the beat of qarqaqeb, the heavy metal Moroccan equivalent of castanets.

An official tour of the outdoor handicraft exhibition with a meet and greet of the artisans followed the ceremony, and then Moroccan American businessman and Vice President of World Jewry, Sir Charles Dahan, led the group inside City Hall for a tour of the Moroccan Jewish heritage expo, featuring gorgeous hand made, filligree and silver jewellery.

Many of the beautiful handicrafts are on sale, including colorful ceramics, carpets, silver work pots, babouches (Moroccan slippers), engraved brass and silver trays, and Berber jewellery. An expert calligrapher will write your name in beautiful Arabic for free, and frame it for a small contribution for his hoped-for ferrari. I plan to go back tomorrow to buy the amazing red, white, blue, and green ceramic tajine adorned on one side by the U.S. flag and on the other by the Moroccan flag.

The festival continues tomorrow and Wednesday in Market Square – the perfect setting for the bazaar-like exposition — right in front of City Hall.