Meknes - Morocco and the UN Food and Agriculture Organization (FAO) signed, on Wednesday in Meknes, a support project to elaborate a national strategy to reduce post-harvest losses and food waste in Morocco. 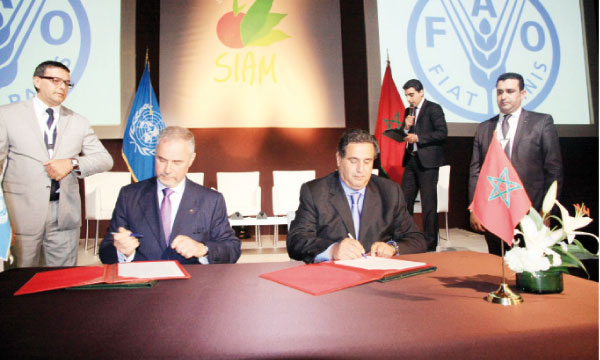 Meknes – Morocco and the UN Food and Agriculture Organization (FAO) signed, on Wednesday in Meknes, a support project to elaborate a national strategy to reduce post-harvest losses and food waste in Morocco.

Inked by agriculture and sea fisheries minister Aziz Akhannouch and FAO representative in Morocco Michael George Hage, this project seeks to identify post-harvest losses and waste of main agriculture products in Morocco to better understand causes behind them and submit proposals to elaborate a nation-wide strategy and an action plan to reduce such losses.

Signed on the occasion of the 70th anniversary of FAO organized on the sidelines of Morocco’s agriculture fair (SIAM), this project will span one year and is worth 99,000 dollars.

In Morocco, post-harvest losses are estimated between 20 to 40% of fruits and vegetables and represent an economic loss for foodstuffs producers.

Held under the patronage of HM King Mohammed VI, SIAM has become a venue for national and international decision-makers in the agricultural sector.