Washington, DC — More than 11,000 people attended the Moroccan festival that opened to the public on Sunday, April 26, 2015, and continued through Wednesday, April 29, 2015, at Market Square, located in Alexandria, Virginia. 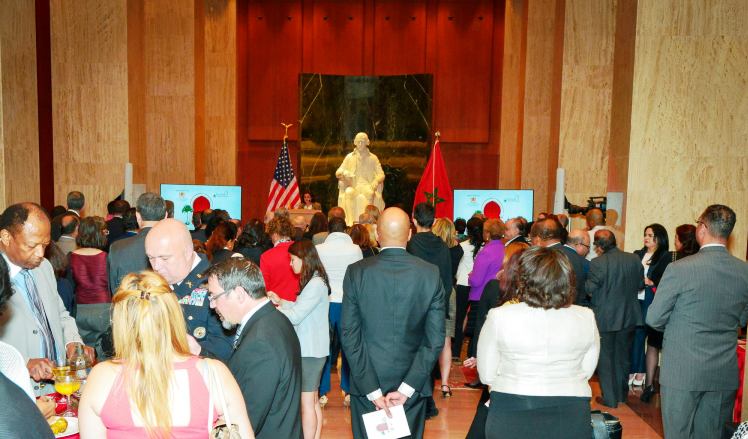 Washington, DC — More than 11,000 people attended the Moroccan festival that opened to the public on Sunday, April 26, 2015, and continued through Wednesday, April 29, 2015, at Market Square, located in Alexandria, Virginia.

The festival featured live performances from Moroccan musicians, authentic Moroccan food and original handicrafts from twelve Moroccan artisans that included metal and ironwork, jewelry, rugs, lighting fixtures, furniture and other products that were made by hand from silver and wood.

Dr. Fatima Marouan, the Moroccan Minister of Handicraft and Social Solidarity Economy introduced the “Moroccan Days in Alexandria,” aimed to educate the public on the rich culture and traditions of Moroccan handicrafts.

In Morocco, the handmade arts and crafts sector employs more than 2.3 million people and generates 8% of the countries GDP. Due to the increased interest in these authentic products — this industry is rapidly growing in global markets.

On the evening of Tuesday, April 28, 2015, a private reception was held in the James Madison room at the Library of Congress, located in Washington, DC. Dr. Fatima Marouan, the Moroccan Minister of Handicrafts and Social & Collaborative Economy discussed the continued collaboration with the United States and its efforts to increase sustainable jobs that will benefit families and woman in the handicraft sector.

The Honorable Levar Stoney, Secretary of the Commonwealth of Virginia brought greetings on behalf of Governor Terry McAuliffe. Other guest speakers included: Rachad Bouhlal, Ambassador of the Kingdom of Morocco to the United States; The Honorable Anthony A. Williams, CEO & Executive Director of the Federal City Council; and Dr. Johnnetta Betsch Cole, Director of the Smithsonian National Museum of African Art. The receptions Master of Ceremonies included: R. Lucia Riddle, Board Vice Chair, The Smithsonian National Museum of African Art.

The festival held a closing reception on Thursday, April 30, 2015, at the Torpedo Factory in Alexandria. Moroccan artisans had the opportunity to meet and greet other artists from Virginia and share handicrafts techniques.