Marrakech - Have you ever been to Marrakech before? If your answer is ‘yes,’ good - you will have flashbacks of amazing memories. If your answer is ‘no,’ that’s also a good thing because you have the opportunity to go on a new journey. I will share tips with you from my five months of experience living in Marrakech. 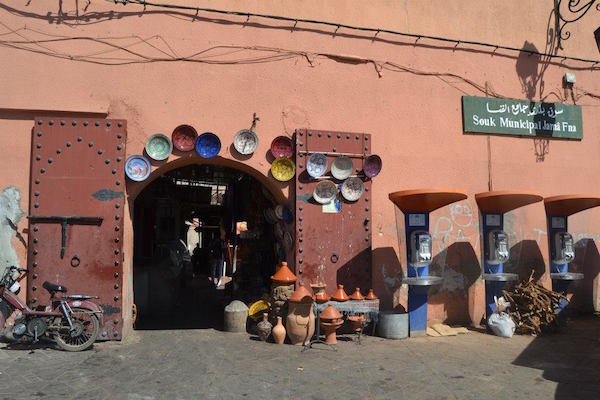 Marrakech – Have you ever been to Marrakech before? If your answer is ‘yes,’ good – you will have flashbacks of amazing memories. If your answer is ‘no,’ that’s also a good thing because you have the opportunity to go on a new journey. I will share tips with you from my five months of experience living in Marrakech.

The first stop on our journey is Dar Bellarj 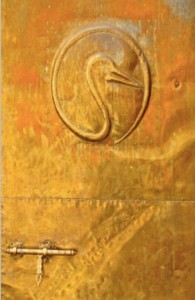 The Dar Bellarj Foundation opened at the end of November 1999 in a Riad (House) located between the Ben Youssef Mosque and the Ben Youssef Madrasah (Islamic School), right at the heart of the Medina (old quarter) of Marrakech. On the site of this house, still known as Dar Bellarj (House of Storks), there was previously a fonduk (hotel or inn) accommodating the last bird hospital in North Africa where a wise old man took care of magnificent birds. The building was no longer used as a house between 1950 and 1985, when it was used as a school. More recently, in 1998, Susanna Biedermann and Max Alioth established the Dar Bellarj Foundation in this house.

The main objectives of the Dar Bellarj Cultural Foundation are to promote a lively and active culture. The foundation organizes concerts, storytelling sessions, singing, dancing, literature, and drama. In the afternoons, it runs workshops on painting, model-making, music, etc., for both adults and children. Well, I am going to stop here about Dar Bellarj because you have to discover the rest yourself by visiting the place! If you are interested in art and culture, this is your golden chance to express yourself.

The second stop on our journey is EL Badi Palace

This once magnificent palace, whose name means ‘the incomparable,’ was built in 1578 by the “Midas” of Marrakech, a Saadian sultan named Ahmed el-Mansour. Its 360 rooms were once sumptuously decorated in marble, gold, onyx, ivory, cedar wood, and semi-precious stones, surrounding a vast central courtyard of pools, fountains, and sunken gardens. This was the venue for parties of extreme extravagance until the sultan died and the capital was moved to Meknès and the palace was stripped of anything valuable. Little remains of its glory days and the ruins of the battlements surround a vast empty space where lavish gardens and palace rooms once stood. Today the main attractions are the nesting storks that have made their home here and (for an additional entrance fee) the original 12th-century marquetry minbar (pulpit) inlaid with silver and gold and painstakingly restored by the Metropolitan Museum of Art.

El Bahia means ‘magnificent’ which this palace truly is. It is one of the largest buildings in the medina. It is the work of grand vizier Ahmed ben Moussa, known as Bahmad, who ordered the construction during his twilight years, from 1894 to 1900.

The palace holds a collection of courtyards, garden, salons, and outbuildings, all of which are equal in their beauty, architectural splendor, and surroundings. There is a large entrance courtyard with enormous trees, the small riad (traditional house) surrounded by rooms and niches, and a palace entirely decorated with zellij (mosaic tile) and finely-sculpted painted plaster and wood. I am afraid I don’t want to describe everything so that you can have a chance to discover it yourself.

The fourth stop on our journey is the Tiskiwin Museum

The Tiskiwin Museum was founded by Bert Flint, a Dutchman. He first came to Morocco in 1954 and during his trip he noticed the beauty of the architecture and interior decoration in numerous private houses in the ancient cities. He decided to settle in Marrakech in 1957 so as to penetrate more deeply the urban lifestyle of the Andalusian tradition that was still alive in Morocco at the time. His research concentrated on the way of life of various people that migrated from the centre to the edge of the Sahara. He built up his own collection of objects that powerfully reflect the art of ornamentation of these people.

The museum exhibition presents artifacts used by Berber speaking people that came originally from Sahara, known commonly as ‘Berber’ in the north, and ‘Touaregs’ in the south. They call themselves Imazighan and in the south, Amazigh. As a Berber woman, I am proud to see part of my Amazigh culture in this museum.

The fifth stop on our journey is the Menara Garden

The Menara Gardens were built in the 12th century by the Almohad ruler Abd al-Mu’min. The name ‘menara’ derives from the pavilion with its small green pyramid roof (menzeh). The pavilion was built during the 16th century by the Saadi dynasty. It was renovated in 1869 by Sultan Abderrahmane of Morocco, who was known to stay there in the summer.

Nowadays, Menara Gardens are one of the most photographed places in Morocco. It’s also a poplar place among locals for picnics.

The sixth stop on our journey is the Majorelle Gardens

The Majorelle Gardens is one of the glories of Marrakech. The garden may be small, less than half a hectare, but it packs a big punch with its series of mini landscapes that take the visitor on an unforgettable sensory journey, from cool, dreamy calm to hot, prickly exhileration. This garden is one of the places that inspire me and I just love being here.

Opened to the public in 1947, this eponymous garden is the chef-d’oeuvre of Jacques Majorelle, painter, plant collector, and scholarly enthusiast for the culture of Marrakech and the Sahara region In 1980 it was bought by the French couturier, Yves Saint Laurent, and his partner, Pierre Bergé, who saved it from destruction by speculators.

The seventh stop on our journey is the Tanneries

Tanners have been around since Marrakech’s founding in 1062 and tanning and the production of leather goods has remained an important trade ever since. Today, as then, the archaic curing process involves an unpleasant cocktail of elemental liquids (a mix of cow urine, pigeon feces, and acids) in which animal skins are cleaned and cured.

You will see half-naked men standing up to their knees in clay vats filled with this evil-smelling mixture, cleaning the fleeces before handing them over to be dyed in different vats filled with other, equally-suspicious multi-colored liquids. After this, the colored fleeces are set out to dry in the sun. 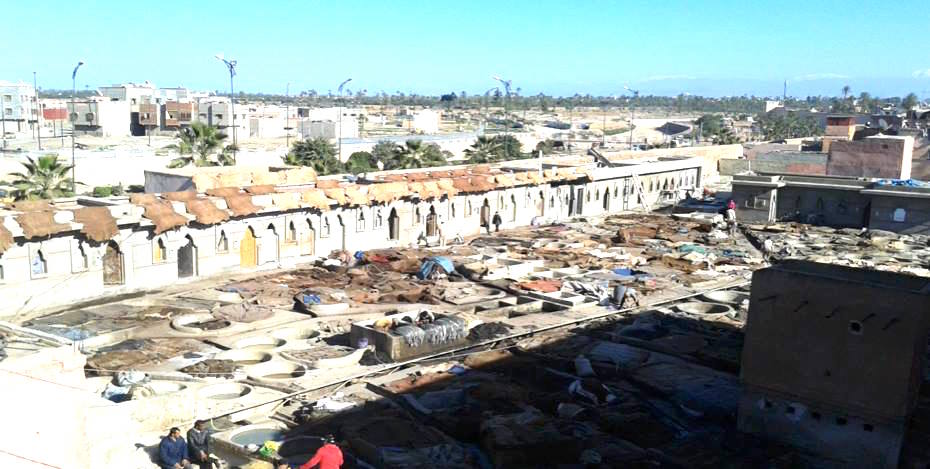 Despite the offensive odor, the tannery district still makes it to the list of ‘top attractions’ for the city of Marrakech because this historic location offers a glimpse into a process so ancient and unpleasant that we can barely believe the reality before our eyes. It is for this very reason that a visit to the tannery is a must. In the tannery quarter of the souk you will find not only the tannery itself, but a host of shops selling a vast range of leather goods, often at highly competitive prices. One or two particularly well-located shops have balconies overlooking the ancient tannery where men toil in primitive conditions to produce articles prized for their beauty, durability, and usefulness.

Although I am afraid our journey has come to an end, I am inviting you to visit these wonderful places. These sites are really worth a visit both by local Moroccans as well as tourists, to learn a great deal about the history and culture of Morocco.