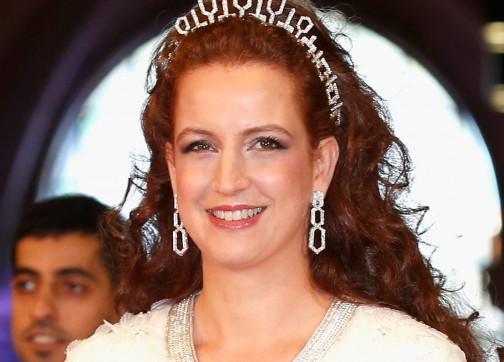 The princess, who was born in 1978 in Fez, comes from an upper middle class family from Morocco’s spiritual capital.

She was married to King Mohammed VI in July 2002 and ever since she became the first wife of a Moroccan king to appear in public and to be given the title of a Princess.

Her mother died in 1981 while she was still 3 years old. She lived most of her life in Rabat where she received her high school and graduate education.

Princess Lalla Salma is the President of Lalla Salma Association for the Fight against Cancer.

In 2013 received the Medal of Excellence of the Most Influential Figures in the World in the field of “Peace and Human Rights” by the International Council of Human Rights, Arbitration, Politics, and Strategic Studies.

She has been voted on many occasions the most elegant woman attending royal ceremonies.

In 2013, she was voted the most elegant woman attending the coronation ceremony of the new Dutch King, Willem-Alexander as his mother Queen Beatrix.

In 2011 British magazine Hello voted her most attractive woman in the royal wedding of Prince William and Kate Middleton.