Rabat- He walks with a limp, but never thought of himself as disabled as he struggled to fulfill his father’s wish, getting a PhD. However, the Ministry of Higher Education’s new policy “torpedoed” his dream, as it banned him from submitting his PhD thesis. 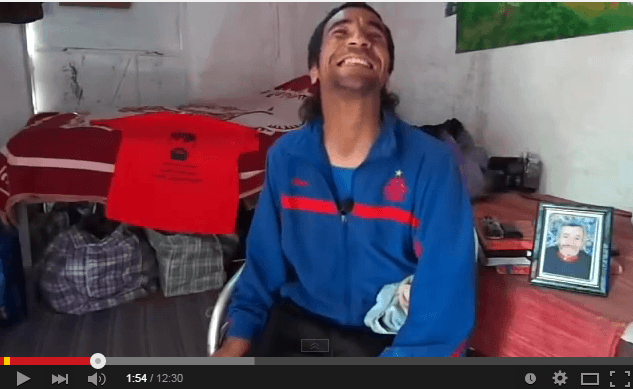 By
Aziz Allilou
-
Aziz Allilou is a student at the Higher Institute of Media and Communications (ISIC) and Morocco World News correspondent in Rabat.
May 10, 2015
Spread the love

Rabat- He walks with a limp, but never thought of himself as disabled as he struggled to fulfill his father’s wish, getting a PhD. However, the Ministry of Higher Education’s new policy “torpedoed” his dream, as it banned him from submitting his PhD thesis.

His name is Adil Outnil, a 38-year old PhD student at Dher Al Mehraz who lives in a humble tin-room in one of Fez’s poor slums. He has suffered from a partial paralysis since he was born.

At the age of two, Adil lost his mother, leaving his father to take care of him. “My father was a hero that carried me upon his shoulders and had been taking me from a hospital to another, until I partly recovered from my disability,” Adil said in very good classic Arabic.

“I still remember one day, a French doctor told my father that I will never be a normal person. My father got so angry that he spat on the doctor’s face. Then, he asked me to promise him to finish my studies and get a PhD,” Adil added.

However, keeping his promise to his father was not easy. In elementary and high school, several teachers tried to push him to drop out of school because of his disability.

“While in Hassan II high school in Tiznit, south of Morocco, several teachers attempted to ban me from studying because of my disability. Far from it, they held a meeting to discuss the possibilities of banning me, as if I am an alien,” Adil explained.

However, at these meeting some teachers defended him and prevented the other teachers from banning him.

Adil says that he had to fights against teachers and schools over 14 times to get into the university, where he also struggled to get a scholarship and be accepted by professors.

Despite his family’s modest circumstances, the shy, intelligent, Adil worked hard at university, and was always in the top of his class. He obtained a Bachelor’s degree and then a Master’s degree in Arabic literature.

Gifted in writing, Adil won the National Short Story Award. He also published a collection of short stories entitled The Gates of the Night, which addresses social topics such as unemployment, begging, elections, and psychological diseases.

His fascination with Arab poet Abu Tayeb Al Mutanabi led him to pursue a PhD in Pre-Islamic Poetry, and thus decided to write a thesis about “the loneliness of poets of pre-Islamic era.”

His thesis took him five years to research. Once he finished writing the thesis, he thought he could breathe a sigh of relief and finally fulfill his father’s wish. The Ministry of Higher Education, meanwhile, was preparing a devastating surprise that “assassinated” his dream.

Earlier this year, the Ministry of Higher Education decided to reduce the time of PhD research from 5 years to only 3 years. The new decision banned over 50 students from submitting their PhD theses since it took them 5 years to research. Adil Outinil was one of them.

Adil claims that the ban was implemented to include him because of his far-left activism with the group Annahj democrati al Qaidi. He went on a hunger strike to protest the decision, but nothing changed thus far.

“The ban decision was a coward manner to punish me over my activism with the Marxism movement in the university, in addition to my political articles that apparently annoyed them,” Adil explained.

Talking to a Daily Al Assima Post newspaper about Adil’s case, The Dean of Dher El Mahraz University said that Adil’s file was sent to the Ministry of Higher Education, concluding that it’s the Ministry that should decide his case.