Kenitra - King Mohammed VI launched and visited, on Tuesday in Kenitra, important socio-economic projects that will turn the Gharb capital into a major development hub likely to have the effect of a lever on the region. 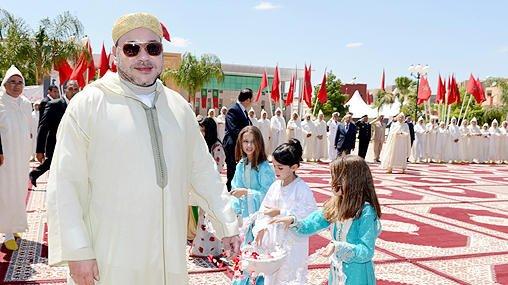 Kenitra – King Mohammed VI launched and visited, on Tuesday in Kenitra, important socio-economic projects that will turn the Gharb capital into a major development hub likely to have the effect of a lever on the region.

The sovereign launched the construction works of a wastewater purification plant for the city of Kenitra and the communes of Mehdia and Sidi Taibi, and of the Kenitra regional hospital, and visited the integrated industrial platform (P2I) at the commune of Ameur Souflia (Kenitra province).

Worth 600 million dirhams, the wastewater purification plant is basic to the city’s liquid purification system as it will ensure the purification of all wastewater by the city of Kenitra and the communes of Mehdia and Sidi Taibi before reaching the Sebou river.

Built over 12 hectares, 7ha for the first phase and 5ha for future extension, the plant will produce 50% of its electric energy needs thanks to a biogas cogeneration sludge treatment chain and photovoltaic panels.

This project is part of the implementation of the Kenitra province liquid purification program carried out over four stages (2004-2019) for an amount of 1.287 billion dirhams.

As for the Kenitra regional hospital project (600 mln MAD), it is in line with the goals of the strategic plan for the province’s integrated and sustainable development (2015-2020), launched by the sovereign on Apr. 7 and which seeks to equip the Kenitra province with community-based social infrastructure that meet the citizens’ health care needs.

With a capacity of 450 beds expandable to 600, the future hospital, which will benefit 1,840,000 inhabitants (52% in the rural area), will include four departments (mother-child, surgery, medicine, emergency-intensive care), high tech wards, checkup services, and a hemodialysis center.

This hospital, whose construction will span 36 months, will ensure more complementarity in the region’s medical offer and decrease the congestion at the Rabat Avicenna university hospital center.

On this occasion, the King handed three equipped SAMU ambulances to the health regional delegation. The sovereign also gave an equipped mobile medical unit and an ambulance to the Benmansour rural commune, as well as four ambulances to the Souk Larbaa El Ggharb city council and to the rural communes of Lalla Mimouna, Mograne and Sidi Mohamed Lahmer. The last five ambulances and the mobile medical unit were purchased under the national initiative for human development.

As regards the integrated industrial platform (Atlantic Free Zone) which the monarch visited, it is part of the implementation of the national pact for industrial emergence, which consists of formalizing Morocco’s offer and capturing investment nationally and internationally.

Located 10 Km away from the Kenitra city’s northern access point, the Atlantic Free Zone, whose building works were launched by the sovereign on Apr. 23, 2010, had, since the launch of the 1rst phase’s marketing late 2012, a great success with national and international economic operators with the creation of over 10,500 direct jobs and the generation of more than 2 billion dirhams of investment.

Stretching over a surface area of 345 hectares, including 192 ha developed in the first phase with a budget of 580 mln MAD, the Atlantic Free Zone comprises currently 20 marketed projects and 8 active units. These multiple nationalities units (Japan, USA, France, Tunisia and Austria) are specialized in the sectors of car industry (production of windshields, plastic components, cable and wiring harness manufacturing and assembly), metalworking industry and plastics manufacturing.

The Atlantic Free Zone offers enterprises, which gained a foothold on its ground, attractive tax and customs measures. It puts at the investors’ disposal equipped plots of land, ready for use units, areas for offices, a logistical and an administrative zones, public and community-based facilities for trade and services.

The platform project includes also a solar firm with a provisional production capacity of 3.418 GWh/year. This project (32 mln MAD) will use green energy to supply plants set up inside the platform with electricity.

The second phase of the P2I Atlantic Free Zone will be launched after the marketing of 70% of the first phase.