Ashura, the tenth of the first month of the Islamic New Year, has been observed in Mainstream Islam in a way totally different from what people think about the New Year in other cultures.

El Jadida – Historically, Ashura does not belong to the solar agrarian calendar. It is held on the tenth of Muharram in the lunar calendar which commenced to be used in 638 CE when Umar Ibn al-Khattab conferred with his advisors on the starting date of the Islamic Year and it was agreed that the date of the migration (hijra) of the Prophet to Medina would be taken as the big event and appropriate reference point to start the Muslim chronology.

Muslims did as their neighbouring societies living in Arabia, the Jews for instance, whose calendar was reckoned from the big event of the exodus marking the deliverance of the Israelites from bondage and their safe passage through the sea of Reeds. The Muslims like the Jews seemed to be influenced by the Sumero- Babylonian calendar based on the recurrence of lunar cycles. Those lunar years like their solar counterparts were hallowed by observed beginnings.

It seems that Muslims were also influenced by the Jews in legitimizing Ashura as a New Year festival similar to Yom Kippur. In fact, Ashura coincides in timing with Yom Kippur. The latter occurs on the tenth of the first month of the lunisolar Jewish calendar. Besides, the Prophetic tradition confirms that the Prophet met the Jews in Medina fasting on Ashura and asked them about it.

“They told him that the day was a great day since God saved Moses from his enemy. The Prophet replied that he was much closer to Moses than the Jews and so decreed to his disciples to fast on that holy day” (as cited in al-Bukhari, Muslim, Abu Dawud).

The Muslims like the Jews developed their calendar with new year ceremonies reminiscent of the Jewish Rosh Hashanah on the first day of Tishri and Yom Kippur on the tenth of the same month. Was there any resemblance between Ashura and Yom Kippur in practice though the theory of borrowing is unexciting in this context? The end-of-the-year festivals are culturally practiced worldwide and Ashura could have even existed for Quraysh under a different appellation as an annual celebration commemorating the end-beginning transition of the year, especially if the Prophetic tradition confirms that Mohammed fasted on such day in Mecca before revelation.

In the Jewish tradition, Yom Kippur is considered the date on which Moses completed his instructions from God, and the Israelites were granted reconciliation for the sin of the Golden Calf, and so its designation as the Day of Atonement. Yom Kippur is a celebration during which the Jews purify themselves and their temples from the accumulating impurities of the old year and welcome the new year morally clean.

The scapegoat symbolically loaded with the Jews’ sins and thrown in the wilderness to die and hence to rid the nation of its inequities is a symbolic purifying ritual by the use of sacrifice. Ashura and Yom Kippur therefore share a lot of affinities as new year purifying rituals, a reason why Moroccan Jews used to observe Yom Kippur on the occasion of Ashura.

Ashura in Orthodox Islam is a new year ritual par-excellence. A close reading of the stories yarned round the ritual and recorded in ulema’s archives may lead to the conclusion that the ritual is a symbolic act of the beginning of a new era, which concurs with the spirit of the New Year festivals. It is believed among Muslims that God created the cosmos, Adam and Paradise on that holy day. God also made Adam enter Paradise and forgave him. Abraham was also born and was then saved from Fire.

Jesus Christ was born and then lifted to heaven on the same day. The Jews were also saved from their enemy. Such great sacred events evince transition in the life-cycle of the community. It is the end of one state of being and beginning of another. This may be juxtaposed to the transition that occurs in the cycle changes of nature for the period of which the vegetation undergoes parallel weather vicissitudes of life, death and rebirth.

Ashura, the Meccan ceremony, once marked by the New Year spirit of fasting and penitence, would undergo a turning point in its historical trajectory as a result of the murder of the Prophet’s grandson al-Husayn, slayed by Yazid b. Mu‘awiya in Karbala’ on an Ashura day in 680 CE. It was a real tragedy commemorated by Shiite communities in sorrow, mourning and lamentation. Sunni communities have kept faithful to the abstaining spirit of Ashura and considered the Shiite celebrations as heterodox for the reason that Islam prohibits the commemoration of death even if it is that of Prophets.

The Shiites observe Ashura in mourning and woe for the death of al-Husayn. In Iran, as Gobineau observes, the whole nation turns into mourning for ten days starting from the first of muharram. The King, ministers, civil servants, and the rest of the population wear black dress and enter a period of mourning. Condolence gatherings (majalis ta‘ziya) are held to echo the atmosphere of death.

Researchers speak of the existence of a commodified culture of Ashura especially in Iran and Lebanon. Condolence gatherings recruit a number of actors and skillful reciters performing the sacred drama of al-Husayn’s martyrdom composed of narration, pantomime, lamenting poetry, texts stirring intensive emotions, and the practice of flagellation.

The Shiite influence migrated to wherever there were Muslims. In Morocco, Shiism grew with the first Berber converts who discovered in Shiism and Kharijism some guarantee for the survival of the Berber identity. Because the Arab conquerors treated the Islamized Berbers as second-class Muslims and exposed them to heavy taxation, slavery, and social segregation, Berber leaders advocated Kharijism that puts Muslims on equal footing irrespective of race, or color, and insists on piety as a requirement for being the commander of the faithful in the Muslim community, which indeed manured the ground for the Berbers to participate in Islamic politics.

Berbers also advocated Shiism that insisted on the leadership of the Prophet’s lineage (ahl-al-bayt), which would cut the way on oligarchs of Arab origins to enslave the non-Arab populations. It was with the arrival of the Idrissids (788-974) that sympathies with Imami Shiism spread in some regions in Morocco. They were the first sharifian dynasty that incorporated both Arabs and Berbers. Prophetic lineage would be established as the basic requirement for monarchic rule, since every dynasty which has ruled afterwards—with the exception of the Almoravids and Almohads—has claimed its descent from the Prophet.

During the Almoravid period, Moroccans embraced the Malakite School and adhered to a Sunni Islam. Yet, some of the Shiite aspects have been retained. The celebration of the Prophet’s birthday (al-Mawlid), a Shiite custom ushered during the Marinid epoch has become a Moroccan national celebration. The veneration of the shurfa has been established as a deep-rooted custom with the spread of sharifian mysticism and the belief in the shurfa’s baraka.

The invocations of intercession addressed to the Prophet and his daughter Fatima have been chanted in Sufi litanies and even intermingled with Moroccans’ everyday language. The commemoration of Ashura in mourning ceremonies has also been observed especially in sanctuaries and among sharifian communities. For Shiites, Ashura commemorates the death of al-Husayn, and is observed in ritual physical pain. It is a day of mourning and expression of strong emotions reflecting the agony Muslims felt on the rebound of the murder of al-Husayn.

Commonly, the Shiites observe Ashura in mourning and woe, in ritual physical pain for the death of al-Husayn. The custom has generally been incorporated in the construction of masculinity within Shiite communities everywhere. It revitalizes the concept of martyrdom incarnated in al-Husayn whose persona is elevated to the model of courage and resistance against tyranny. Thus, the celebration of Ashura involves self-flagellation of the male Shiites who inflict pain on their bodies to the rhythm of a chant in a sadomasochistic ritual of masculinity to attain a manly disregard of pain.

The Shiite influence might have been transferred in general to the practices of Sufi orders in Morocco such as Hamadsha, followers of Sidi Ali b. ?amdush in Meknes, whose adepts go in extravagant public exhibitions wherein they chop their heads and flagellate themselves, and to ‘Isawa, another maraboutic order following al-Hadi b. ‘Isa also in Meknes, whose adepts perform varied rites of self-flagellation, including eating spiny cactus and raw, freshly sacrificed, sheep. Such rites are performed by members of the Riff-raff like in the past when “. . . craftsmen of every sort, cobblers, blacksmiths, soldiers, charcoal sellers, coarse country folk from the Gharb and Sais Plains, uncouth highlanders from the Rif and Zerhoun, in short, the rabble” (Brunel 1926, 51-2) participated in the ceremony.

Until now, similar social groups of underclass maraboutic adepts from peasants, small dealers, roaming sellers to hand laborers of every kind are widespread in Morocco. Their coarser ways serve the needs of the lower uneducated strata in society. Self-flagellation does not only offer those subalterns a test of masculinity but may also fulfill their desire for “magical emancipation” from the contingencies of social life.

In sum, Ashura, the tenth of the first month of the Islamic New Year, has been observed in Mainstream Islam in a way totally different from what people think about the New Year in other cultures. Instead of considering the New Year’s as a day of drinking and dancing, Muslims have followed the tradition of their Prophet and seized the opportunity to spiritually observe the day in fasting and repentance.

Like the Jews on Rosh Hashanah and Yom Kippur, Muslims spend much of the day in prayers going to mosques and cemeteries, and thinking that every soul stands to be examined by God in a trial for its actions of the past year. To further purify themselves, they visit friends and relatives and abstain from the pleasures of life, all in an attempt to supplicate Allah to forgive their wrongdoings and offer them another chance to do better the coming year. 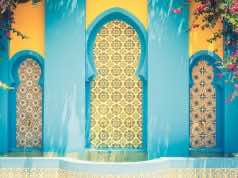 Moroccan Cultural Diversity Under the Spotlight at Casa Mediterráneo