The 18-year-old Moroccan dancer known as PerixStep is full of sensation on and off the stage. Perixstep is praised for his stunning performances among the AUI community and spends the rest of his time as a passionate student at Al Akhawayn University.

Al Akhawayn University Ifran is small but houses a diverse community. It is a place with a new story to tell every day, a new life to live, and a new connection to make. Not only is there excellence in education, but there is also beauty in student life hobbies and extra-curricular activities. The university is known for supporting young dreamers in their educational life, personal passions, and future career goals.

Inspired by Marquese Scott, Oussama started his dancing career by performing a set of animated, robotic and jazz dance movements under genres of music like dubstep. “PerixStep,” his stage name, is also the name given to the kind of dances he performs. Born and raised in Rabat, Oussama has reached his dream of becoming a celebrity among the AUI community, the place where he first discovered and improved his dancing skills.

A huge buzz surrounding his latest performance in the 2015 AUI Talent Show has made him one of the most demanded celebrities in the AUI. The AUI Talent Show is a yearly show that showcases the hobbies and hidden talents of AUI students and gives them the opportunity to publicly express themselves through singing, dancing, rapping or playing a musical instrument. It is one of the important events in AUI that shows how talented its students, such as Oussama, are. 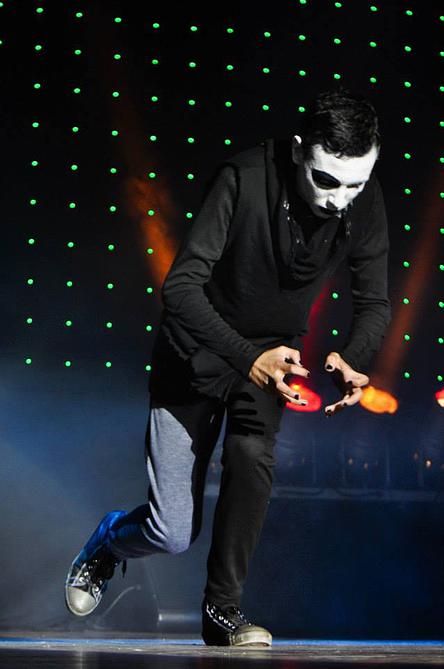 Oussama El Khairi happily accepted our invitation for an interview with him.

MWN: Now that your dancing abilities are so advanced, everyone wants to know how and where they began.

Oussama: My dancing career began when I joined Al Akhawayn University in 2013. Soon after enrolling in school, I met some dancers that showed me different dancing techniques. , One of them was Azhar Sistorms, who is also an AUI student and one of the most well known young Hip-Hop dancers in Morocco. I say that she is one of the best female dancers I’ve ever met. Although I had been dancing before joining AUI, I did not have much knowledge about the structure and the techniques that make up a memorable dance performance. After some dance rehearsals, I considered what the students taught me and re-performed their techniques with my own style; the style that I feel more comfortable with. Well, I don’t follow the given “guidelines” exactly as I learned them, but I guess that is what makes me unique and different from everybody else when it comes to dancing. I try to put creativity into my dances to make them uniquely mine.

MWN: When did you decide to share your talent with the public?

Oussama: I was constantly attending the different dancing classes offered by some clubs in the University, where I got to know some professional dancers. It was actually Azhar who convinced me to participate in the AUI’s talent show managed by the SAO (Student Activities Office). It was crazy. That was when the Al Akhawayn community discovered my talent. After that, I began to get invited to perform in different events at multiple clubs.

MWN: You already mentioned that Marquese Scott was the reason you started dancing for the first time. Is he still your ultimate inspiration?

Oussama: Marquese is a legend because he took the dancing industry to a new, higher level and I really respect him, but I don’t think that he’s my ultimate inspiration. My dance crew, House of Touch, (international online dance crew) and I try to inspire each other as much as we can. We have different styles and come from all over the world, yet we all have the same goal and function as a family. So, House of Touch is my ultimate inspiration, if I may say so. Shout out to them by the way! (laughs.)

MWN: How do you feel when you perform? You look deeply concentrated on the stage.

Oussama: When I’m on stage, I just focus on the music and whichever beat is coming up next. That sounds insane, but you feel like you are dancing alone in a place you have never been to before. When performing, nothing else matters besides that moment when you are dancing. That is how it feels like.

MWN: What are your intentions while performing such dances?

Oussama: I always tend to tell a story. My movements are a series of events that form a story. My greatest performances are the ones where I am strongly connected with the chosen music. In these dances, the combination of body movements, facial expressions and music all form the artful story. If I’m dancing on a song that I don’t connect with, then the dance will not tell a story. It’s all about the way in which I project my feelings to the audience.

MWN: Do you have any vision for the future? Would you ever consider participating in a dancing competition?

Oussama: Well, I am not interested in competing in a talent show or a battle competition if that’s what you mean, at least for now. Concerning my future plans, I am currently working on my first collection of dancing videos that I’ll upload to YouTube soon.

MWN: What does it feel like to be a dancer?

Oussama: To be honest, I really feel blessed and proud to be a dancer, and I’m extremely grateful for the people who helped me show up out of nowhere.