Rabat - During my travels over the past seven years, I’ve realized a few things. One of those is that life is fluid. Like water, life runs through filters, sewers, down bumpy roads and in waves of all strengths and sizes. Through it all, it changes a bit. 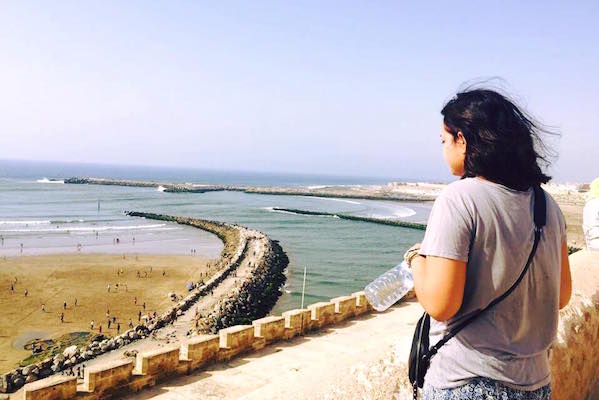 By
sara gomez
-
Sara is a writer, traveler, and student at The Florida State University in Tallahassee, Florida.
May 20, 2015
Spread the love

Rabat – During my travels over the past seven years, I’ve realized a few things. One of those is that life is fluid. Like water, life runs through filters, sewers, down bumpy roads and in waves of all strengths and sizes. Through it all, it changes a bit.

Yet, it is still water.

The train my cousin takes to school in Medellin, Colombia takes a longer route than the bus I take to school does, the smell of the coffee my grandmother in Mexico City makes for breakfast is stronger than the instant coffee packets I sprinkle into a mug of water every morning, and the light bulb that illuminates my side of the room in my host home here in Rabat, Morocco, is a tad bit more fluorescent than the one in my bedroom in Florida.

Life is different all around, but if we squint our eyes tightly enough, it’s easy to see that there are many similarities connecting seemingly opposite ways of life together. These similarities exist to remind us that we’re all living on the same planet, after all.

One of the similarities between life in Morocco and what I’ve experienced of life in South and North America is the importance placed on greetings and goodbyes. In South America and Morocco, it is customary to greet each other with a kiss on the cheek, although two, three, or even four are more typical in Moroccan culture. In Colombia and Mexico, women greet each other and men with kisses and men typically shake hands or exchange a soft hug, depending on the level of friendship and comfort between the two.

Everyone gets the kiss in Morocco—though I’ve also noticed a few handshakes between businessmen in a professional setting.

In North America, however, I’m always faced with a decision to make when meeting someone new: should I kiss him or her on the cheek like I was raised, in my Hispanic household, to do? Or would a hug be more appropriate? Most people go for a hug when first meeting someone new, so the usual outcome of a kiss on the cheek is a surprised expression, nervous laughter, and an uncomfortable first impression for the one doing the kissing.

I am sure Moroccan’s would have a lot of awkward moments in the United States, as would an American in Morocco. Moroccans in Colombia or Mexico, however—now that would be a fantastic fusion of three similar, yet extremely unique cultures. I presume a Moroccan, a Colombian, and a Mexican would have a blast in the kitchen. Moroccan cuisine is similar to that of traditional Colombian and Mexican dishes, yet almost completely different from the food in the states. You won’t find a McDonalds or Wendy’s on every street corner in Mexico, Colombia, or Morocco like you will in the United States. In fact, I’ve only seen one McDonalds in the city since I’ve been here, and it looked almost more out of place than I do.

Like most Hispanic food, Moroccan food is based around a heavy usage of fruits and vegetables. Instead of ordering a Diet Coca Cola or a Dr. Pepper like one would in the states, Hispanics and Moroccans tend to accompany their meals with juice made from fresh fruits and vegetables, such as carrots, peach, avocado, and oranges. Not to mention the tea! This is one specialty that undeniably belongs solely to Morocco, and rightly so. Tea, specifically mint, is served at almost any occasion, with any meal, at any time of the day. It’s traditional for a reason, like Colombian coffee and Mexican chili peppers; it’s one of a kind. Mexican and Moroccan meals are incomplete without spices. The spices used in both countries are, of course, different, but that’s what makes them unique to each cuisine. The only “spices” used frequently in American cuisine are salt and pepper, accompanied with other bland ingredients such as cornmeal and potatoes, unlike Hispanic and Moroccan dishes which are full of both flavor and nutrition.

I could go on forever about the many similarities and differences between these four countries which I have at some point called my home, but I must mention the most distinct difference of all: the people. Colombians are loud and festive—always laughing about something, usually animating their conversations with Colombian sayings that have existed for generations and will be passed down through their children and younger family members. Mexicans are stern and warm—protective over what’s theirs, affectionate toward loved ones, and always down for a hearty meal with family. Moroccans are friendly, welcoming, intelligent, and complex human beings with more history behind them than ever imaginable. Americans are patriotic and multi-faceted: it is hard to define a culture that has taken so much from other ones, in both a negative and a positive way. One thing links these three cultures together, something that (in my opinion), American culture lacks: family values.

Hispanic and Moroccan traditions revolve around spending time with family—whether its at the dinner table, after or before school, and even during their entire lifetime, the physical bond between a Hispanic or Moroccan family is a very significant one. As an American who grew up in a Hispanic household, I’ve experienced both sides of the coin.

Admittedly, I’ve also played for both teams. I left home for college, something almost unimaginable among my extended family living in Colombia or Mexico. I traveled to Morocco by myself, something that was highly rejected by my traditional parents (at first! I think they’re happy about it now.) But I’ve also spent New Years Eve at home with my parents and sister, carrying out traditional Hispanic traditions such as eating twelve grapes at midnight and wearing yellow underwear for happiness, peace, luck, and wealth in the New Year, while my American friends were out partying with each other. I’ve visited family and spent countless days doing simple things like watching soccer with my grandfather while the people back home went backpacking throughout Europe together. During my childhood, while all my friends were having sleepovers that I wasn’t allowed to attend, my mom was tucking me into bed, and now we’re best friends. Meanwhile, some of my friends struggle to talk to their parents about things as simple as stress at school or work.

While American individualism is beneficial in terms of educational opportunities, career paths, and personal “freedom,” without a tightknit family like those found in Moroccan and Hispanic households, these American luxuries are hard to enjoy.