Dakar - King Mohammed VI and President of the Republic of Senegal Macky Sall chaired, on Thursday at the presidential palace in Dakar, the signing ceremony of thirteen bilateral agreements on the different cooperation fields between the two brotherly countries. 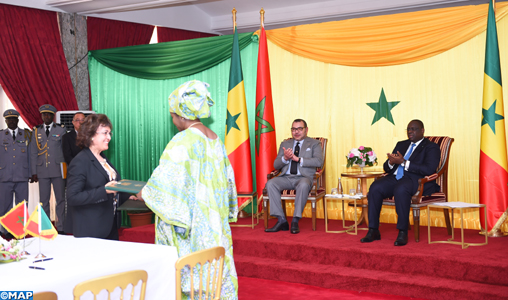 Dakar – King Mohammed VI and President of the Republic of Senegal Macky Sall chaired, on Thursday at the presidential palace in Dakar, the signing ceremony of thirteen bilateral agreements on the different cooperation fields between the two brotherly countries.

These agreements are in line with the royal integrated approach towards Africa which puts the human element at the heart of the development process and its objectives.

Six out of the 13 agreements seek to promote human development programs given their direct impact on population such as the headquarters agreement between the Mohammed VI Foundation for Sustainable Development and the Senegalese government, in addition to the setting up of an economic impetus group.

The thirteen agreements are:

– A memorandum of understanding to foster economic partnership and help with the emergence of regional economic actors (setting up of an economic impetus group), inked by Senegal’s foreign minister Mankeur Ndiaye and chairman of employers national council Baidy Agne and Morocco’s foreign minister Salaheddine Mezouar and CGEM president Meriem Bensaleh.

– An agreement to construct a small-scale fishing unloading site in Soumbedioune in Dakar, inked on the Senegalese side by fisheries and sea economy minister Oumar Gueye and economy, finance and planning minister Amadou Ba, and on the Moroccan side by agriculture and sea fisheries minister Aziz Akhannouch, economy and finance minister Mohamed Bousaid, president-delegate of the Mohammed VI Foundation for Sustainable Development Mostafa Terrab and CEO of Attijari Wafabank group Mohamed El Kettani.

– A cooperation agreement on water between the national office for electricity and drinking water (ONEE) and Senegal’s national company for waters (SONES), signed by Charles Fall and Ali Fassi Fihri.