Rabat - Transportation Minister Aziz Rabbah does not appear to be happy with the "clothing habits" of some of the artists invited to take part in Morocco's flagship festival, Mawazine. 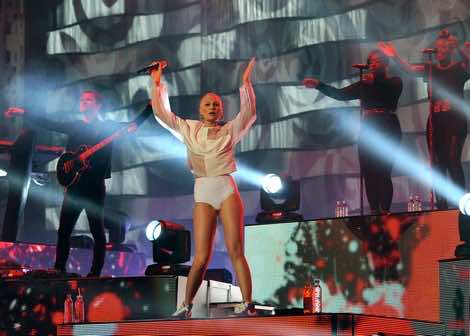 Rabat – Transportation Minister Aziz Rabbah does not appear to be happy with the “clothing habits” of some of the artists invited to take part in Morocco’s flagship festival, Mawazine.

Speaking at a forum on Tuesday, the PJD Minister criticized the clothing of some artists who will perform at the Mawazine Festival, saying their dress does not respect “Moroccan values.”

“Morocco is an open country (…), but there are values. And because of this, artists cannot come and get undressed before our eyes,” said Rabbah.

The Minister also criticized the dates the festival will take place, between May 29th and June 6th, 2015 in Rabat. He said the festival coincides with the exam periods in several schools and universities.

In 2011, another member of the Islamist PJD Party and current Minister of Solidarity, Women, Family, and Social Development, Bassima Hakkaoui, criticized the participation of Colombian singer Shakira at the Mawazine festival and the event’s cost.

“A waste of money just to watch a pornographic show,” Hakkaoui said.

In 2011 the PJD also pushed for Elton John’s Mawazine concert to be canceled on grounds that “it will promote homosexuality.”

In 2014, however, the party, which leads the governmental coalition, did not protest against the participation of Puerto Rican singer Ricky Martin, who publicly acknowledged his homosexuality in 2010.

In May 2013, English singer Jessie J appeared scantily clad on the stage of the Festival Mawazine. The show, which was broadcast live on Moroccan TV channel 2M, caused an uproar in the country.