Dakar - King Mohammed VI, accompanied by Senegalese President Macky Sall, handed, on Friday at the University Hospital Center of Fann in Dakar, a donation of ten tons of medicines and equipment. 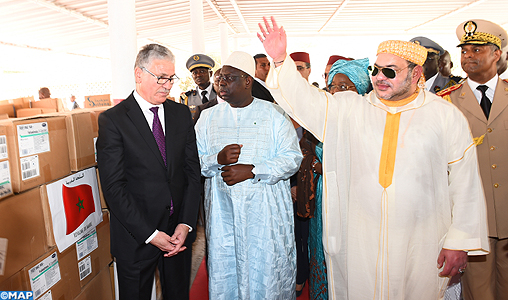 Dakar – King Mohammed VI, accompanied by Senegalese President Macky Sall, handed, on Friday at the University Hospital Center of Fann in Dakar, a donation of ten tons of medicines and equipment.

This royal donation is part of the solid cooperation between Morocco and Senegal in the sector of health and medical and paramedical training.

It also shows the will of King Mohammed VI contribute to the progress and prosperity of the brotherly Senegalese people, the establishment of a strategic, multifaceted and voluntary-based partnership between the two countries and the mobilization of all potentials to achieve the goals of a sustainable human development in this friendly country.

The consignment of medicines and medical material is made up of contagious diseases antibiotics, gastrointestinal, respiratory and neurological medicines, ophthalmology and otorhinolaryngology drugs, and other medicines used in case of emergency, anesthesia-intensive care and nephrology-dialysis.

It is also composed of a batch of medical and technical material, including autoclaves for sterilization and automatic blood pressure monitors for health centers in Senegal.

The royal donation, which comes a day after the signing, under the chairmanship of HM the King and the Senegalese head of state, of a series of bilateral cooperation agreements, reinforces the human and social dimension of the Moroccan-Senegalese partnership and reflects, again, the sovereign’s solicitude for African populations.