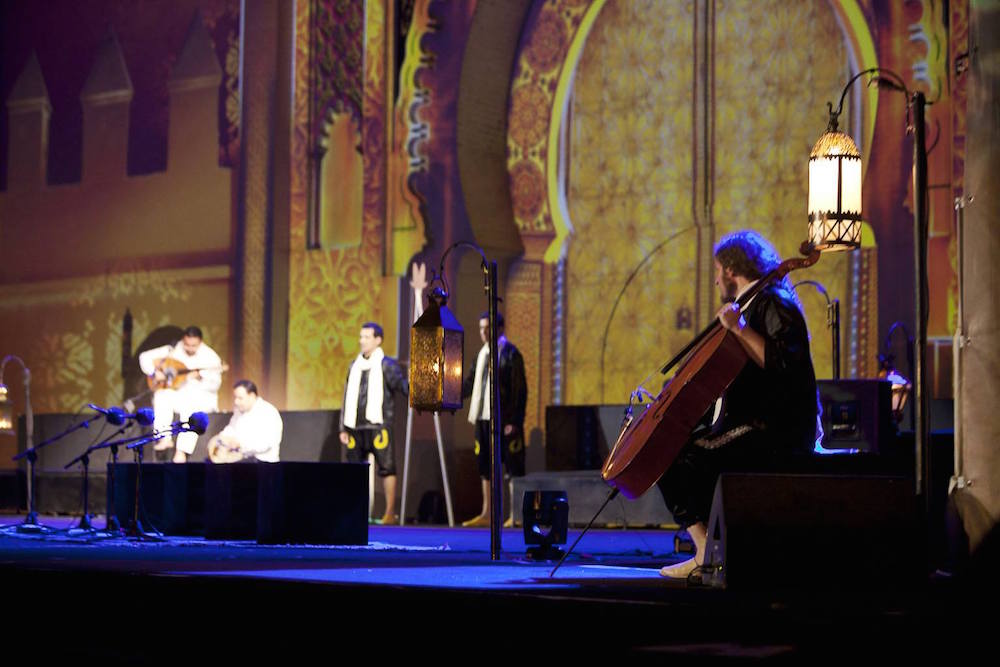 Fez- With a press pass around my neck, camera in one hand, and note taking materials in the other, I walked down the gold-embroidered red carpet and scoped out my company for the rest of the night.

The opening night of the Fez Festival of World Sacred Music brought together people of all different cultures, interests, and styles for an evening of entertainment featuring African performers. The main attractions were music, dancing, and theatrics, but from the point of view of someone on the outside looking in, the audience was a production all in itself.

Greetings and expressions of welcoming and joy filled the air like surround sound in all different languages— French, Arabic, Dirija, English, and Spanish were the ones I could identify, but I’d be kidding myself if I said those were the only ones spoken. The aroma of every perfume, Cologne, and body odor imaginable wove it’s way through conversations and interactions like the handmade headscarves and dresses adorning the frames of the festival goers. Even the single black cat that I saw lurking beneath the seats was dressed in its finest attire.

Shortly before the show began at around 9 pm, the sun began to set. From behind the stage, the light show was unlike any other sunset I’ve experienced in Morocco so far: first the sky turned almost white with a hint of pale blue, similar to the color of the hat that a new born baby boy is gifted from the hospital, followed by its female counterpart: a pink so pink I would call it cotton candy.

From behind the cotton candy clouds rose a golden lining— it’s the Moroccan version of a silver lining— casting a spectacular glow on every face for miles. Nothing in Morocco is complete without gold.

While the light show in the sky had ended, the one on stage had just begun. Audiovisuals played a large part in setting the mood for the festival to begin; the projections on the stage were intricate and impressive, superior to any digital projection designs I’ve ever seen before, and the sound effects and background music complemented them to a T.

Then, the fun began. Performers such as Moroccan oud player Driss al Maloumi, Tamango the tap dancer from French Guyana, and Malick Sow, the Tijani master from Senegal, put on one of the most interesting and awe-inspiring musical shows I’ve ever witnessed. Although I could not understand most of what was sung, art is not expressed through words alone— in fact, I’d say words are the least of it.

The performers’ dance moves, costumes, face paint, expressions, and tonal range said it all. I believe that music is not solely about words, but about the sounds as well. Art is not only about the thing itself, but about the feeling it provokes. The breath being inhaled and exhaled, the vibrations in the performers voices, and their dynamic dance moves, of course, inspired a unique feeling inside of me, like only something truly Moroccan can.

One notable act was Ker Simb, who blew the audience away with their spectacular and impressively choreographed performance and charisma. Some of the dancers even took time after the show to pose for pictures with the crowd, while staying completely in character—growling and crawling around the stage of course.

Fez: An African Reflection, did just that: represented and showcased the many eccentric and diverse stories that make up the continents rich history, all while providing an enlightening and enjoyable evening not only in front of, but also under a sky full of Moroccan stars.