Fez - Attendees of opening night of this year’s music Festival in Fez were blown away by a combination of illuminating graphics, vibrant costumes, and ambient music to tie it all together. 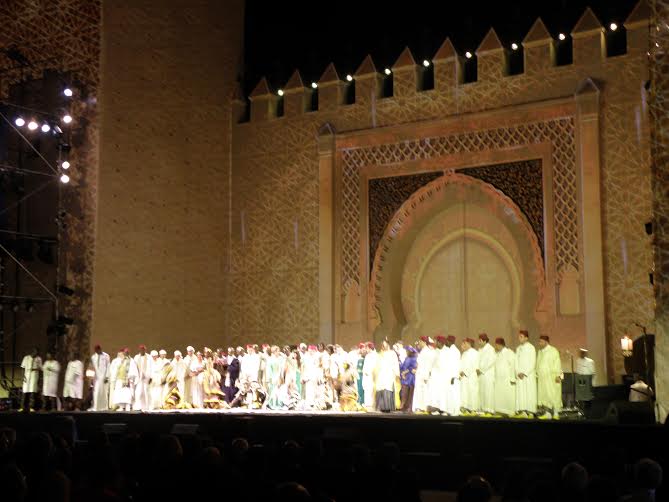 Fez – Attendees of opening night of this year’s music Festival in Fez were blown away by a combination of illuminating graphics, vibrant costumes, and ambient music to tie it all together.

The story of Fes: an African Reflection was told through movement and sound through the interpretation of a group of talented musicians, dancers, and artists.

The Fez Festival of Sacred Music began on 22 May 2015. Opening night was a tribute to the mystical travelers of Africa and their historical links to Morocco.

The performers all had unique elements to bring to the festival. To name a few of the highlights from opening night, Driss al Maloumi brought a taste of Berber music with percussion style instruments while Ballaké Sissoko showed his talent on the kora.

On quite the opposite spectrum, Masks of the Moon performed an intricate and magical ritual from the griot village, wearing white cloth masks. Similarly, Doudou N’Diaye Rose Children performed the Simb Lion Dance.

The costumes tied the performers with their music during this dynamic show. The costumes worn in the lion dance were very symbolic of the lion, with bright colors, face paint, and flowing pieces of fabric. Alternatively, some musicians wore less intricate outfits which added to the simplicity of their performance and allowed viewers to fully absorb it.

The graphics, which projected on the castle wall behind the stage, added an extra element to the performances not often seen on traditional stage settings. Not only did the castle wall become a backdrop to the stories being told, but they moved and became dynamic with the story. Water falling through the castle walls, a castle in the desert, and a mosaic wall filled with water which continued to move are just some of the backdrops of these performances.

The festival runs through 30 May with daily events.