Rabat - While the Fez Festival of World Sacred Music got off to a good start in its opening concert on Friday, the concert Saturday night of popular Tunisian singer Saber Rabaï at Bab al Makina ran into problems with rain and technical difficulties. 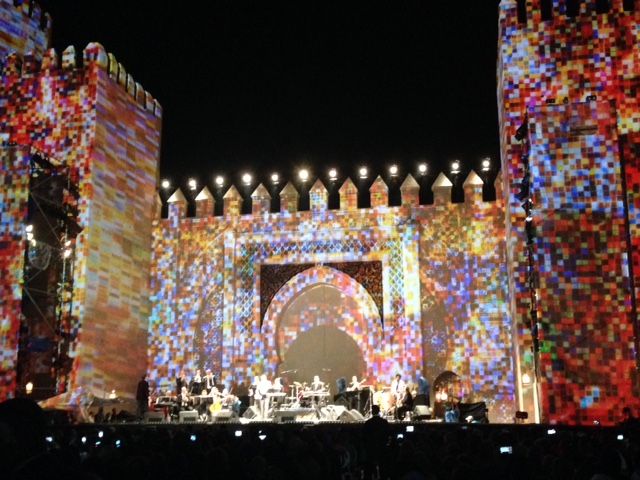 Rabat – While the Fez Festival of World Sacred Music got off to a good start in its opening concert on Friday, the concert Saturday night of popular Tunisian singer Saber Rabaï at Bab al Makina ran into problems with rain and technical difficulties.

Unanticipated heavy rain during the day and an apparent lack of any rain contingency planning caused technical difficulties with the sound equipment on the uncovered open-air stage, delaying the 9 P.M. start of the concert by nearly two hours, and leaving the seats in the venue too wet to sit on and most of the audience having to stand on their feet for the concert.

Audio difficulties continued to mar the sound quality of the concert throughout the rest of the night, making it difficult to hear the headline singer and his back up vocalists.

In contrast, the accompanying orchestra gave a masterful performance, playing traditional Arabic music, both original and some well-known favorites, as well as the romantic Charles Aznavour-esque style Rabaï is known for.

The orchestra, admirably led by a conductor not named in the program given to the press, outshined the singer, demonstrating the instrumentalists’ technical prowess, most notably on a funky bass guitar, cracking congas and darbouka, and some really luscious lead violin portamentos.

The instrumentalists played the tight rhythms with exacting precision.  While a few in the audience stayed until the very end of the concert (and even danced a little) well after midnight, the damp and the cold and the lack of dry seating drove many away early.