Rabat - Oil rich Saudi Arabia will soon be home to the largest hotel in the world when the 10,000-room Abraj Kudai hotel is completed in 2017. 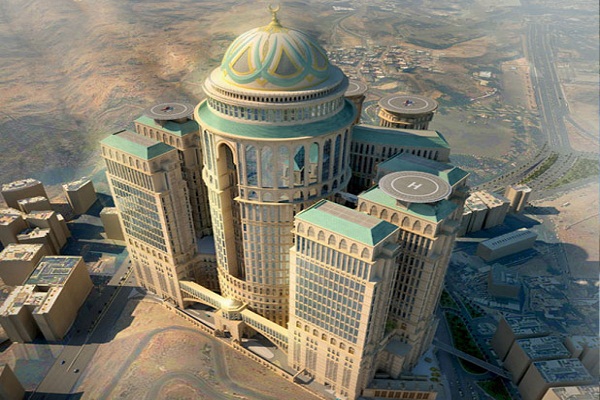 Rabat – Oil rich Saudi Arabia will soon be home to the largest hotel in the world when the 10,000-room Abraj Kudai hotel is completed in 2017.

The complex will be funded by the Saudi Ministry of Finance. The project’s total cost is estimated at a whopping $3.5 billion. It will be set in the Manafia area in Makkah’s central zone.

The architecture firm Dar Al-Handasah is designing the immense edifice which will stretch across 1.4 million square meters. Ten of the towers will provide four-star accommodations while the remaining two will offer luxurious five-star facilities. Five of the hotel’s floors will be exclusively used by members of the Saudi royal family.

“Due to its unparalleled size, height as well as distinguished location, exposure and architectural style, the building appears as a striking landmark with a profoundly modern multifunctional identity relating to both the Saudi locality and the Islamic universality of its expected users,” developer Dar Al-Handasah said on its website.

London-based design practice Areen Hospitality has been appointed to design the interior spaces, which will be complete with palatial luxury typical of the region, according to Arabian Business.

However, Irfin Al-Alawai, the director of the UK-based Islamic Heritage Research Foundation, said “The city is turning into Mecca-hattan,” referring to the luxurious and expensive New York area of Manhattan.

“Everything has been swept away to make way for the incessant march of luxury hotels, which are destroying the sanctity of the place and pricing normal pilgrims out,” s Al-Alawai said in an interview with The Guardian.

“These are the last days of Mecca,” he added. “The pilgrimage is supposed to be a spartan, simple rite of passage. But it has turned into an experience closer to Las Vegas, which most pilgrims simply can’t afford.”