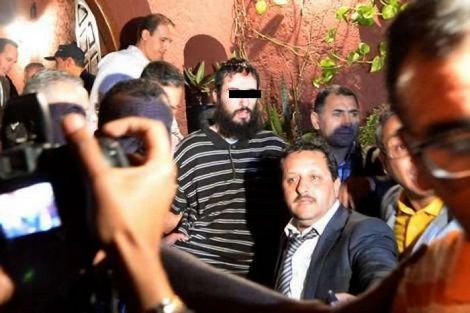 Rabat – The case of Younes Tsouli, the former British detainee charged for terrorism and extremism, has exposed several hidden factors. These factors have been revealed as Moroccan law enforcement and the Rabat judiciary police, under the supervision of the public prosecutor, conduct their investigation.

Younes Tsouli, a Moroccan citizen who obtained both an American and British education, attended elementary school in the United States of America and subsequently moved to the United Kingdom to continue his education and obtain a degree in computer science, is a product of a new trend of extremism.

This wave of extremism results from alienation in Europe. This alienation causes limited or no religious supervision, the teaching of differing doctrines from various Islamic schools, as well as an escalating adoption of distorted models of ideological approaches, especially those derived from the Indian subcontinent countries, such as Pakistan and Afghanistan.

One day after Younes Tsouli’s deportation from the United Kingdom, he set fire to his parents’ household and entered the house of the United Kingdom’s General Consul to Rabat illegally while in possession of large knives.  His actions posed a threat to the Moroccan law enforcement officers, to himself, and to the general public. These acts depict fault, leading to the following questions: does the error lie in the United Kingdom’s approach to the treatment and rehabilitation of extremists? The effectiveness of sanctions issued by the United Kingdom or the Western judicial systems? Or is the execution of the detainee’s sentences responsible for such acts? These legitimate questions are founded on the fact that Younes Tsouli spent more than ten years in British jails, and despite being subjected to security, judicial, health, and educational services by the British system during his prison terms, he remained an extremist with the notion that violence is the sole means in furthering his ideology; demonstrating his lack of hesitance to committing the above-mentioned acts following his return to Morocco. This failure, in all its manifestations, depicts the flaws within the Western approach to dealing with terrorism, despite their exposed best practices to dealing with terrorist threats and the growing extremism obscurantist tracks.

This failure was not limited to the prevention and control of terrorism within the United Kingdom, but rather, affecting the culture and image of promoting and protecting human rights, as portrayed by the West. The Rabat judiciary police report, according to a communiqué confirmed by the Rabat public prosecutor’s office, maintained that after 13 hours of interrogation by the Moroccan law enforcement officers, Younes Tsouli claimed to be a victim of serious physical abuses during his detention within the British prisons.

Additionally, according to sources responsible for investigating the case, Younes Tsouli admitted to being sexually assaulted repeatedly, in multiple instances by prison guards, during his confinement in prison. If this accusation turns out to be true following investigation, this could contribute to a strong setback for the British correctional system and their claims of human rights protection and spread of democracy.

Based on the Salafi ideology, apart from what will be revealed by the Moroccan judiciary authorities, we can affirm that a person detained for extremism cannot make false allegations of sexual abuse unless it is true. The reason for such is that “manhood” is a condition to the Salafi doctrine. Furthermore, provided that Younes Tsouli divulged such acts to a female psychologist (under the jurisdiction of the Rabat Prefecture) we can only assume that his claims are true, mainly because an extremist will never speak to a woman (other than his mother, sister or wife) let alone engage in a conversation or discussion related to enduring sexual abuse unless he feels that his dignity was unjustly harmed.

In terms of the law, the United Kingdom and its Moroccan counterpart ratified a memorandum of understanding concerning deportation on individuals involved in terrorism. This bilateral agreement contains deportation procedures,  obligations, rights and guarantees prescribed for deportees. Nevertheless, what the British party forgot, intentionally or unintentionally, is to provide the deportee judicial guarantees while in British custody as portrayed within this case. The case of Younes Tsouli, the first person to be deported and victim of sexual assault and harm to his dignity according to his statements, depicts a lack of consideration to the values and principles of international law. This serious incident has raised several concerns pertaining to the implementation of the aforementioned bilateral agreement between our two countries.

To date, everyone is impatiently waiting for the outcomes of the judicial investigation conducted by the Moroccan law enforcement and judicial authorities, on charges made by Younes Tsouli against her Majesty Prison Service. This investigation will lead to not only an international Rogatory letter, but will also demonstrate that advocating human rights has two sides; an apparent side, used mostly as leverage, against developing countries, and a hidden side, which unfortunately sets the stage for such practices within Western prisons that tolerate indecent assault of prisoners.