Rabat - Reality TV star Khloe Kardashian posted a selfie picture on Instagram Tuesday from her recent trip to Dubai, wearing the Niqab, a Muslim garment worn by some Muslim women while in public, covering all of the face except the eyes. 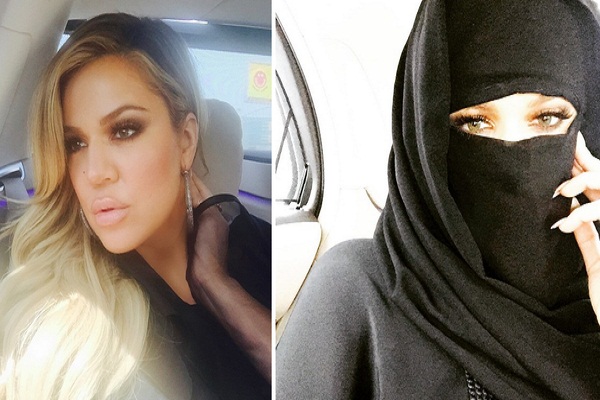 Rabat – Reality TV star Khloe Kardashian posted a selfie picture on Instagram Tuesday from her recent trip to Dubai, wearing the Niqab, a Muslim garment worn by some Muslim women while in public, covering all of the face except the eyes.

The 30-year-old star captioned the Instagram image “Habibi Love”. “Habibi” is an Arabic term of endearment, meaning “my love.”

The Instagram post sparked a series of angry comments, especially from those who saw the star’s wearing of the Muslim veil as offensive. Others, however, argue that she was seemingly trying to adhere to the country’s conservative style.

“Women getting killed and beaten up for wearing the niqab, but you keep pretending it’s a fashion accessory, the disrespect,” one commenter wrote.

“I have never been more offended in my whole entire life,” another one added. “My sister wears the niqab and she gets vilified daily. you can wear it and it gets sexualised and praised. I am deeply offended and was a fan of yours, i am disgusted.”

Other users rushed to the defense of their star: “Where does it say that non-muslims aren’t allowed to wear this? I’m studying Islamic Theology so I’m honestly very curious about that answer.

Btw, it’s your opinion to say she’s using this as a fashion statement (sic) instead of showing her respects. When the queen of my country went to visit the UAE she also wore a niqaab. Guess she was also being disrespectful then. Cuz she’s a christian.”

Another user said: “Even a fan claiming to be of the Muslim faith backed the 30-year-old reality star’s decision to wear the religious garb, writing, “Why the hell are u all so offended by it???? Don’t bring religion in this conversation, it’s no big deal, religion has nothing to do with destroying peace, I’m a muslim and I’m not taking any religion’s side, just let her be the way she wants to be!”

Khloe Kardashian is in Dubai for an appearance at a hair and makeup seminar with Kuwaiti makeup artist and model Fouz al Fahad on Wednesday, according to Al Arabiya.