Bissau - Mohammed VI and Guinea-Bissau's head of state José Mario Vaz chaired, on Thursday at the presidential palace in Bissau, the signing ceremony of 16 partnership agreements in the different areas of cooperation. 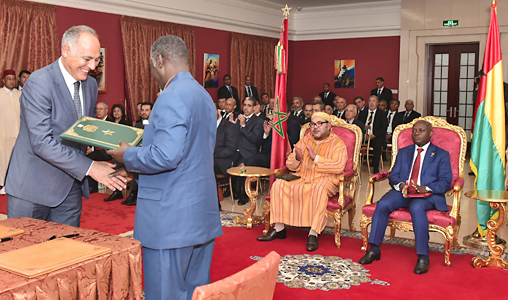 Bissau – Mohammed VI and Guinea-Bissau’s head of state José Mario Vaz chaired, on Thursday at the presidential palace in Bissau, the signing ceremony of 16 partnership agreements in the different areas of cooperation.

The agreements are as follows:

– An agreement on visa abolition for holders of diplomatic, service or special passports, inked by Mezouar and minister of foreign affairs, international cooperation and communities Mario Lopes Da Rosa.

– An agreement on non-double taxation and tax evasion regarding income taxes, signed by Mezouar and Mario Lopes Da Rosa.

– An agreement on investment encouragement and reciprocal protection, inked by Mezouar and Mario Lopes Da Rosa.

– A draft agreement on justice, signed by Mezouar and justice minister Carmelita Pires.

– A cooperation agreement on agriculture signed by Aziz Akhannouch and minister of culture and rural development Joao Anibal Pereira.

– A Morocco-Guinea Bissau-FAO tripartite agreement as part of south-south cooperation, signed by Akhannouch and Joao Anibal Pereira, and on FAO’s side by Joachim Laubhouet-Akadie.

– A partnership agreement on solar energy development between the Moroccan Agency for Solar Energy “MASEN” and the ministry of energy and industry signed by Mustapha Bakkoury, chairman of MASEN’s board of directors and Carlos Pinho Brandao director general for energy.

– A framework agreement on scholarships and internships in Morocco for Guinea-Bissau’s students, executives and technicians, signed by Abderrahim Kadmiri and Marcelo Pedro d’Almeida.