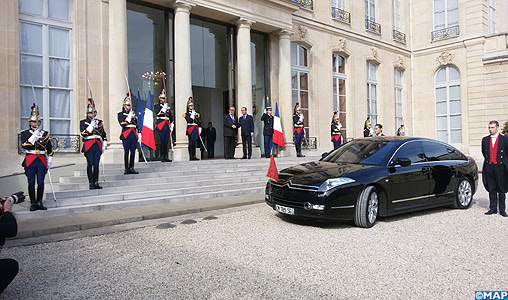 Speaking to the press on this occasion, Benkirane underscored the cordial atmosphere marking the talks with President Holland which reflects the strength of ties between the two countries.

Benkirane told reporters that he discussed with President Hollande a range of issues relating to bilateral relations as well as the latest development at the regional and international levels.

Morocco’s government chief also expressed satisfaction with the results of the 12th French-Moroccan high level meeting, held on Thursday in Paris culminating with the singing of a set of cooperation agreements.

Morocco and France are set to adopt a forward looking approach regarding their bilateral relations, he said, adding that the two countries’ relations remain “special and positive”.

The audience was attended by Minister Delegate to foreign affairs Mbarka Bouaida and Morocco’s Ambassador to France Chakib Benmoussa.

On Thursday, Benkirane co-chaired with his French peer Manuel Valls the 12th French-Moroccan high level meeting which aimed at giving a new momentum to bilateral relations and examined a range of political, security, economic and social issues along with regional partnerships.