Istanbul - A few years ago he fled Aleppo, Syria and came to Libya. When conflicts started here as well, they reminded him of what he had been through in Syria. When gunshots in the streets were heard inside his house and when his house was robbed, he became certain that he and his family was not safe there any more. Someone he'd been introduced to by a friend promised to take him and his family to Europe. The money he had wasn't enough; he could come up with the necessary amount only after selling the furniture in his house and borrowing some more. 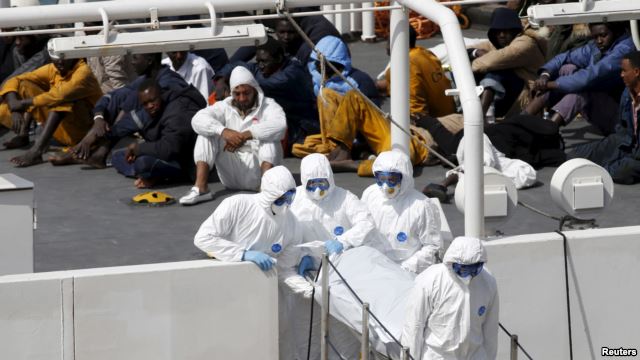 By
Harun Yahya
-
Harun Yahya is prominent Turkish writer.
May 29, 2015
Spread the love

Istanbul – A few years ago he fled Aleppo, Syria and came to Libya. When conflicts started here as well, they reminded him of what he had been through in Syria. When gunshots in the streets were heard inside his house and when his house was robbed, he became certain that he and his family was not safe there any more. Someone he’d been introduced to by a friend promised to take him and his family to Europe. The money he had wasn’t enough; he could come up with the necessary amount only after selling the furniture in his house and borrowing some more.

After being kept waiting in a sizable warehouse with hundreds of people, one night he sailed in a ramshackle boat in which people were piled on top of each other; his wife and daughter sat apart. He was inside the boat in a few square meters of space with scores of other people. It was very hot inside and it was very difficult to breathe. As they sailed away from the shore, he suddenly heard loud screams. He reached the deck at the risk of stepping on other people. When he saw that their boat was taking on water, he realized that his wife and daughter did not know how to swim. Saving them was the first thing he thought about. However it was so crowded that he couldn’t even head towards them and the boat rapidly sank. In then darkness he held on to a piece of wood in the sea and screamed out the names of his wife and his daughter with all his might but his voice faded out between the screams of those asking for help. As day broke he was taken into an Italian boat. Along with their sunken boat all his dreams about a safe life were destroyed. Moreover he had lost his wife and his daughter.

Similar stories have been repeated with distressing frequency in the last two years. Many people from Afghanistan, Syria, Eritrea and Sub-Saharan African countries are looking for salvation by going to Europe. According to Public Prosecutor of Palermo, Maurizio Scalia, more than one million asylum seekers are waiting, ready to go to Italy from Libya right now.

A part of those trying to go to Europe take off with the hope of achieving a better life and better earnings. In many European countries, asylum seekers are considered as outsiders wanting to exploit their riches.

The action plan prepared by the EU Ministers of Internal and Foreign Affairs reveal that Europe considers the problems of asylum seekers not as a problem of humanity but as their own security problem.

Actually a similar plan was prepared in 2013 by another commission and was submitted to the approval of member countries. On the Voice of America website, the old plan is compared with the new one and the following evaluation is made:

“The most striking aspect of the plan that has a feel of a previous plan which was submitted for approval on 2013 and was rejected by 24 of 28 member countries, is that it has an even lower human dimension.”

The Euronews website, on the other hand, presents an even clearer view on the approach of Europe regarding the asylum seeks with the heading “The EU failed the class in aiding immigrants.”

The main reason why policies about aiding and protecting asylum seekers receive harsh opposition in the European countries is the self-serving philosophy that prevails throughout the union.

The most current reflection of this philosophy can be observed in the fierce reaction shown towards the suggestion of distributing the asylum seekers between the EU countries according to a pre-defined quota. Stating that it is absolutely not acceptable to say “we should not let asylum seekers be drown at the sea but that they should not be brought to our countries as either,” Vice President of EU Commission Frans Timmermans criticized this situation. The fact that every member country primarily looks out for itself in the face of political and social developments profoundly undermines the spirit of unity. Catalonia in Spain, Padania in Italy, Scotland in the UK are all looking for an opportunity to leave, thinking that they will thus generate greater wealth for themselves: While that is the case, it becomes meaningless to expect people who cannot even stand their own poor, to extend a helping hand to those who come from abroad and are in need.

On the other hand, there are also those in the UN, like Italian Prime Minister Mateo Renzi, who approach this problem more humanely. Mr. Renzi does not approve the security precautions developed to keep refugees away from Europe. In answering a question, the Italian Prime Minister noted that 91 of 100 immigrant boats coming to his country come from Libya and said, “The hypothesis of a military intervention in Libya is not on the table,” and added that it is impossible to create peace in North Africa with the use of force.

Indeed, the exact solution to the influx of asylum seekers the EU is being subjected to lies in clearing away the causes of this immigration. According to statistics in the report prepared by the Office of the UN High Commissioner for Refugees, the primary reason behind immigration is because those people are in genuine fear for their safety and security as disorder grips the MENA region.

The report prepared by the Office of UN High Commissioner for Refugees, shows further growth in forced displacement in the first half of 2014. The report states that 5.5 million people have been forced out of their homes in the first half of 2014; 1.4 million of those passed through international borders and became refugees after fleeing their home countries and the remaining 4.1 million have been forcefully displaced within their own countries. In his assessment about the report, stating that the refugee problem is a result of conflicts going on in the world, UN High Commissioner for Refugees Antonio Guterres said, “As long as the international community continues to fail to find political solutions to existing conflicts and to prevent new ones from starting, we will continue to have to deal with the dramatic humanitarian consequences.”

When a threat to Europe or to their own people presents itself in the Middle East or in Africa, instead of immediately bombing or invading that region, Europe should consider resorting to more reasonable methods based on knowledge and education. For instance, starting from childhood, members of all faiths can be taught that unjustly killing or displacing people, stealing their property and inflicting torture upon them is a grave crime. In order to stop the influx of immigrants to Europe, a struggle must be given not against the asylum seekers from North Africa but with the underlying conditions that oblige them to seek asylum.