Rabat- Pop music celebrity Jennifer Lopez’s concert in the Mawazine Festival on Friday has precipitated sharp criticism from social media users in Morocco who are complaining about the “sex” aspects of her show. 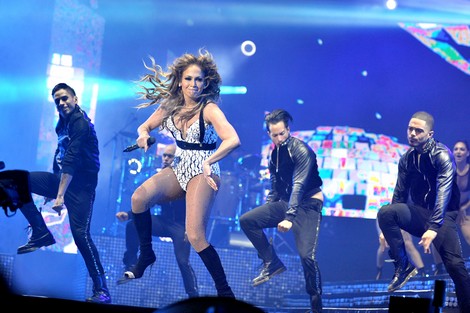 Rabat- Pop music celebrity Jennifer Lopez’s concert in the Mawazine Festival on Friday has precipitated sharp criticism from social media users in Morocco who are complaining about the “sex” aspects of her show.

The American singer performed on Friday, May 29th at the opening of the Mawazine Festival in Morocco’s capital Rabat. As expected, J-LO left little to the imagination, sang and danced wearing skimpy costumes that exposed her legs and cleavage during her 2-hour long concert which was broadcast on Morocco’s state-owned television channel 2M.  Lopez and her accompanying female dancers, who were also dressed in revealing costumes, changed outfits several times during the show.

Many Moroccans took to social media platforms to denounce the revealing way Jennifer Lopez and her dance crew were dressed. Some of them called the concert a “threat to the moral fabric of the Moroccan society,” while others complained that the American performer was too “sexy” on stage, and criticized the 2M TV channel for broadcasting the show. Some have also called upon the Minister of Communication to resign for allowing the concert to be broadcast on public television funded by taxpayers.

Some commenters suggested that she could have worn a body suit or tights to cover up and still dance since she was playing in a Muslim country.

Others, however, said that Moroccans should have seen it coming since Jennifer Lopez is known for her “sex appeal.”

Others said that even by America standards she shows “too much skin,” and there is “nothing new here.”

Others criticized the Festival organizers for not having asked the artist to make her show more appropriate for the audience by toning down her sexy outfits and dance moves, as she did recently in Indonesia.

During one of her concerts in Indonesia, the world’s most populous country, Jennifer Lopez was asked by organizers to dress modestly and to cover up.

Many others denounced the “hypocrisy” of their fellow Moroccans criticizing Nabil Ayouch’s film about prostitution for its obscene language, while at the same time they are the first to attend J-LO’s “sexy” live show in Rabat.