Rabat - A Muslim woman was allegedly subject to discrimination on board a United Airlines airplane on Friday, May 29th. 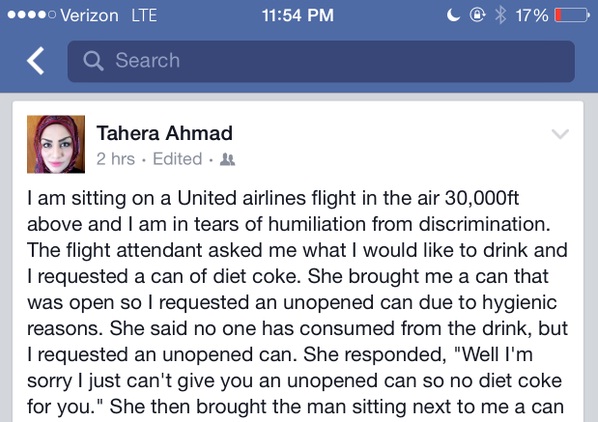 Rabat – A Muslim woman was allegedly subject to discrimination on board a United Airlines airplane on Friday, May 29th.

The woman, identified as Tahera Ahmed who works at Northwestern University as director of interfaith engagement, alleged to have been discriminated against by a flight attendant on board the said airplane.

She said she was on a flight on Friday and asked a flight attendant for a diet coke.

The attendant said: “We are unauthorized to give unopened cans to people because they may use it as a weapon on the plane,” according to Tahera.

Appalled by the attendant’s behavior, she turned to passengers around her to ask if they had witnessed the “discriminatory and disgusting” incident.

She said she felt the hate in his voice and his raging eyes. Tahera then burst into tears because no one defended her and that some people just shook their heads in dismay.

People online are using the hashtag #Unitedfortahera to support Tahera, saying they will boycott the American airliner until it issues an apology.