Casablanca, Morocco’s most populous city, is reportedly producing about 3,000 tons of waste per day, collected from 20,800 containers placed around the city. 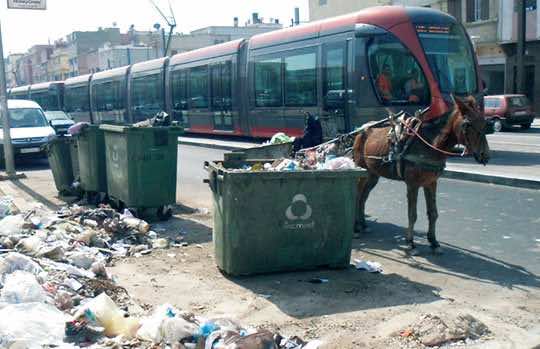 Casablanca, Morocco’s most populous city, is reportedly producing about 3,000 tons of waste per day, collected from 20,800 containers placed around the city.

According to the report, about 4,700 waste collectors collect around 20,800 containers from 237 regions every day.

187 machines and vehicles, which are equipped with a GPS system for real-time monitoring of the collection trucks and recording of covered zones, are mobilized in this task.

In addition to the 4,700 street cleaners deployed in the field for manual sweeping, the city uses 53 sweepers and road washers to clean 570 kilometers of Casablanca streets every day.

Chichaoui said, “We have achieved tangible achievements over the whole territory of the city with a lower cost compared to other major cities of the Kingdom.”

For his part, François Pyrek also expressed his satisfaction for this year achievements.

“We are satisfied with our work, but we always seek improvement. We are currently adapting the establishment by neighborhood to improve the management points. We also want to raise awareness and to change attitudes,” he said.

The same source said that the waste management costs MAD 126 per capita in Casablanca, a very low sum compared to other large cities of the kingdom like Marrakech, where the cost is MAD 200 per capita, or Rabat, where total is near MAD 400 per capita.