Rabat - Morocco had warned France about Yassin Salhi, the man accused of beheading his boss at a French gas factory at Saint-Quentin-Fallavier near Lyon last week. 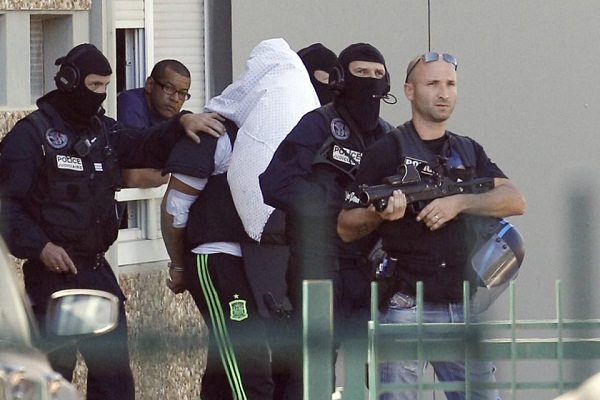 Rabat – Morocco had warned France about Yassin Salhi, the man accused of beheading his boss at a French gas factory at Saint-Quentin-Fallavier near Lyon last week.

The Moroccan authorities issued a bulletin to their French counterparts warning of Salhi’s suspected links to the so-called Islamic State, according to daily newspaper Al Ahdath Al Maghribiya.

The same source said that the French authorities contacted their Moroccan counterparts immediately after the beheading and the attempt to blow the factory to request more information about the suspect.

Salhi, who was born on 25 March, 1980 to a Moroccan-born mother and an Algerian-born father, was known to Moroccan authorities for his suspected ties with extremist groups.

He had also become known to French police in 2006 after attending meetings held by a radical preacher in western France, and was placed on a security watch list.

His name was dropped when the watch list was renewed two year later. However, his name was picked up again by the French intelligence services in 2013 and 2014 because of his continued connections with the Salafi movement in France.

According to investigators, Salhi sent a selfie with the victim’s severed head to a French radical who is believed to be fighting in the ranks of the so-called Islamic State in Syria.

The French radical has been identified by French media as 30-year-old ‘Sebastien-Yunes V-Z, a Muslim convert who reportedly left France to join Jihadist groups in the Middle East last year.

The killing on Friday comes less than six months after the attacks on Charlie Hebdo magazine and a kosher supermarket in Paris that left 17 people dead, including two police officers.