Taroudant - German Chancellor Angela Merkel attended an Iftar meal on Tuesday in Berlin, calling on all Germans and Europeans to respect Muslims and Islam, which is “a part of Germany.” 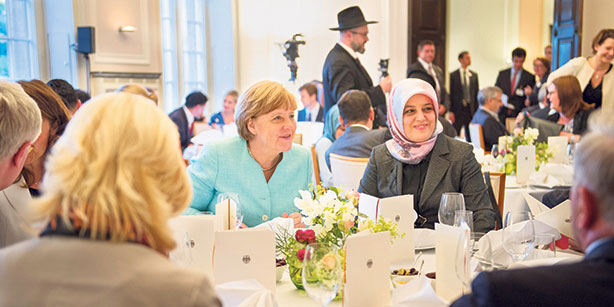 By
Larbi Arbaoui
-
Larbi is a freelance writer and assistant editor at Morocco World News.
Jul 2, 2015
Spread the love

Taroudant – German Chancellor Angela Merkel attended an Iftar meal on Tuesday in Berlin, calling on all Germans and Europeans to respect Muslims and Islam, which is “a part of Germany.”

Speaking at an official Iftar held at Villa Borsig, the official guesthouse of the German Foreign Ministry in Berlin, the Chancellor announced that “Islam belongs to Germany and will remain so.”

Senior officials and religious leaders of different faiths and prominent figures in politics and society attended the official Iftar, which was the first of its kind in Germany.

Despite the growing anti-Islamic campaigns led by the German nationalist group known as PEGIDA, Merkel reiterated that Germany is home to all different religions without discrimination, condemning violent acts against all places of worship.

All violent attacks on a “synagogue, a mosque or a church, all actions against places of worship, is considered an act of violence to us all,” she said.

The Chancellor reminded the attendees that Muslims living in Germany are “law-abiding citizens” who respect the German constitution.

During her participation at a Muslim community rally organized in mid-January to condemn the Charlie Hebdo attacks, the Chancellor said that “Hatred, racism and extremism have no place in this country,” adding that ‘We are a country based on democracy, tolerance, and openness to the world.”

According to Merkel, “there are about four million Muslims living in Germany, and Islamic religion courses are being taught in German schools.”