Rabat - Two Al Jazeera journalists have spoken out after Israeli navy forces assaulted and abducted them while covering the 'Freedom Flotilla III' heading to Gaza. 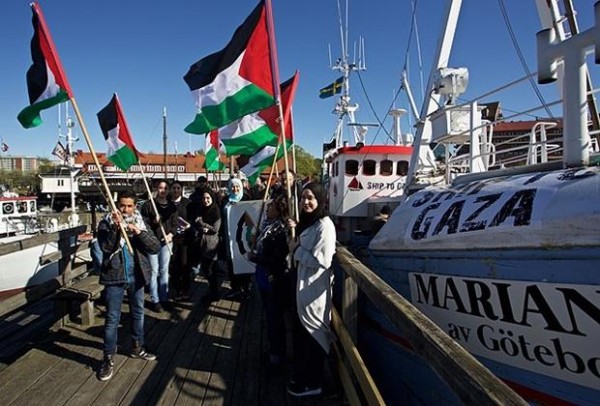 Rabat – Two Al Jazeera journalists have spoken out after Israeli navy forces assaulted and abducted them while covering the ‘Freedom Flotilla III’ heading to Gaza.

Mohamed El Bakkali, Al Jazeera’s reporter accompanying the flotilla, said that the attack on the ship occurred in international waters, which is an act of piracy and a violation of international law.

El Bakkali said, “We were 100 km deep in international waters when the Israeli Navy intercepted us and demanded the ship to be stopped and handed over. Upon the captain’s rejection, the soldiers stormed the ship and assaulted some of whom were in the cockpit. After that, they led the ship to Ashdod where we were inspected and investigated, all of our belongings (mobiles, laptops and cards) were confiscated, and then we were jailed pending deportation.”

Ammar Hamdan, the Al Jazeera cameraman who documented the trip, said that the Israeli army abducted and detained them under the sun in the middle of the sea for nearly 12 hours. Hamdan also said that the Israeli authorities “lost their minds” after Al Jazeera’s footage reached the world from the vessel, especially the images of Israeli soldiers storming the ship. Hamdan added: “All of their attempts to make me reveal  the whereabouts of the footage failed, which prompted them to blackmail and search me more than five times. They reached a level of ugliness and depravity to photograph me naked. In the end, one of the officers lost his mind and shouted at his men claiming that I swallowed the camera memory cards, and I will get it out of my stomach after I get released”.

El Bakkali said that Israeli forces accused the journalists during the investigation of breaking the law. He also added that the Israeli authorities did not respect their right to call a lawyer during investigation, and refused his request to contact Al Jazeera’s bureau chief in Jerusalem.

“Israel has violated many international laws by hijacking and arresting journalists doing their job on a peaceful and unarmed flotilla while in international waters and heading to Gaza for humanitarian purposes. We call on the international community to work together to protect journalists who are doing their profession of covering stories. The release of our colleagues without returning all of their personal possessions and technical equipment is not enough. We together  must do whatever it takes to expose violations of journalists’ rights”.

This is not the first incident where Israel has boarded and taken over ships and captured journalists. In previous flotillas, and among other activists and journalists, Al Jazeera’s Othman Battiri, Jamal Elshayyal, Mohamed Vall, Ali Sabri, Andre Khalil, Wasimah bin Saleh and Abbas Nasser were all taken into custody by Israeli forces and then later released.

In this context, El Bakkali commented: “What happened to us is a violation of press freedom and an attempt to commit a crime without witnesses. However, this will not deter us from continuing our mission of reporting the truth with impartiality and integrity, regardless the sacrifices”. Hamdan commented on that saying: “Even if the price is what happened to me when they sentenced me in absentia prohibiting me from entering Occupied Palestine for ten years.”