Agadir - A Spaniard converted to Islam this week in a mosque in Ait Melloul, a town about 10 kilometers away from Agadir. 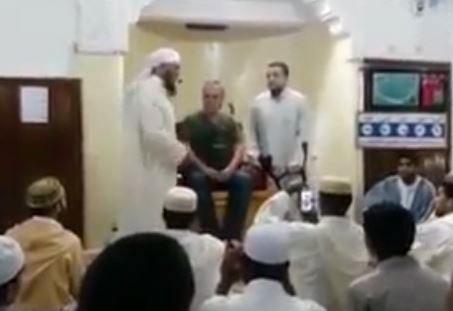 Agadir – A Spaniard converted to Islam this week in a mosque in Ait Melloul, a town about 10 kilometers away from Agadir.

In a video posted on YouTube on July 1, the Spaniard pronounced the Shahada, the Arabic word for the Muslim profession of faith that make one a Muslim, in the presence of hundreds of worshippers.

With the help of an interpreter, the Spaniard repeated after the imam of the mosque the Islamic faith’s first pillar in Arabic.

Immediately after the convert pronounced the Shahada twice, stating that “there is no God but Allah, and that Muhammad is His Messenger,” hundreds of exultant Muslims proclaimed Allahu Akbar (God is a great) to celebrate the significant step in the convert’s life.

Last week, hundreds of worshippers in the Koutoubia Mosque in Marrakech witnessed the conversion of a German woman and an Ivorian man, after Tarawih prayers – the extra prayers performed during Ramadan after the last prayer of the day.

Every year during the holy month of Ramadan, a number of foreigners from around the world convert to Islam in Morocco.