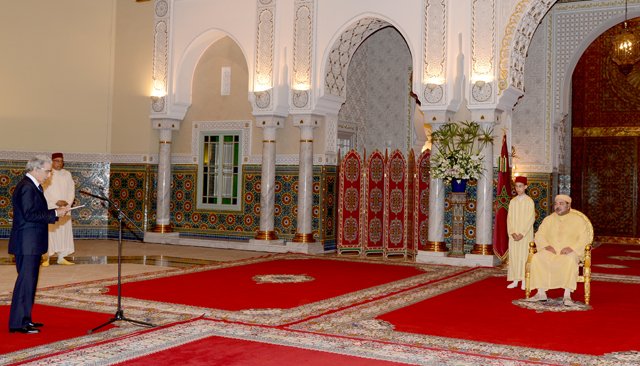 In his address before the King, Jouahri indicated that domestic economic growth, amid sluggish global economic recovery and relatively unfavorable weather conditions, slowed to 2.4 percent in 2014. This deceleration impacted the labor market, as the number of jobs created did not exceed 21,000 and the unemployment rate increased to 9.9 percent, he said.

Concerning macroeconomic balances, he pointed out that the year was marked by a decrease in fiscal deficit to 4.9 percent of GDP and a significant improvement in the current account deficit to 5.6 percent of GDP which contributed, alongside the continued inflow of foreign investments and loans, to a noticeable increase in international reserves.

This improvement in reserves, the relative control of fiscal balance and the low level of inflation -which reached 0.4 percent- gave the central bank sufficient space to support economic activity, added Jouahri. As such, the Bank reinforced its accommodative policy and decreased twice its key rate to a record low of 2.5 percent. It also responded to the liquidity needs of banks, lowering to this end the required reserve ratio from 4 to 2 percent. Moreover, the Bank continued the implementation of its new program aimed at facilitating the access of very small, small and medium-sized enterprises to bank lending, he noted.

Jouahri said that the year saw the enactment of the new Banking Act which fosters the emergence of new actors and financial services, adding that the Bank is now working on preparing the regulatory texts for the implementation of this Act.

In his address, Governor Jouahri stressed that Morocco benefits today from the conjunction of several positive factors, notably the important flows of grants and the low international energy prices, which provide it with enough space to continue reforms aimed at accelerating growth, reducing poverty and improving the population’s living conditions. He went on saying that this situation is further reinforced by the good reputation that our country has earned itself in the region as an island of peace and democracy and bolstered by the positive assessments of international rating agencies and financial institutions, thanks to the enlightened and wise vision of the King.

To best exploit this opportunity as an impetus for development, Jouahri underlined the need to overcome numerous challenges facing our country. These include in particular the low return on investment characterizing several sectors, chiefly the education and training sector to which the King devotes special attention. He also called for achieving the large-scale projects underway, particularly the reform of the judicial system and the improvement of the business climate, as well as for accelerating the implementation of pension system reform and carrying on with the tax reform, while strengthening social safety nets.

In this context, Jouahri pointed out that the situation of unemployment in our country raises the question of the capacity of our development model to take advantage of the current demographic transition, stressing the need to find suitable solutions for this structural problem.

The Governor of Bank Al Maghrib underlined that the implementation of the structural reforms within appropriate timeframes and the regular assessment of decisions and choices are the most effective way for our country to mobilize the necessary synergies to create the momentum it needs to make a qualitative shift upward in the growth pattern.

He stated in this regard that the study which King Mohammed VI has called for regarding intangible capital to make it a fundamental criterion in the formulation of public policies will contribute to overcoming these challenges, on top of which is the more equal distribution of wealth.