Washington DC - The Algerian authorities are not happy with the United States Department of State 2014 Country Report on Human Rights Practices  in Algeria. While not responding to the well documented cases of right abuses and freedom restrictions contained in the report, Algiers issued an incoherent statement complaining about the “The negative spirit” and “the misjudgments” of the American administration. 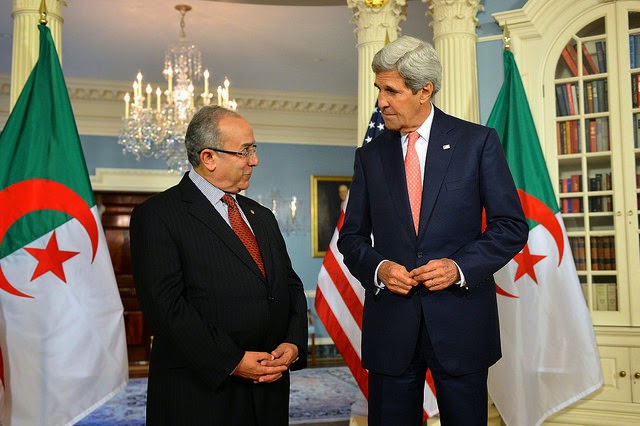 By
Hassan Masiky
-
Hassan Masiky was born in Kenitra, Morocco, and is based in Washington as a blogger and freelance writer.
Jul 8, 2015
Spread the love

Washington DC – The Algerian authorities are not happy with the United States Department of State 2014 Country Report on Human Rights Practices  in Algeria. While not responding to the well documented cases of right abuses and freedom restrictions contained in the report, Algiers issued an incoherent statement complaining about the “The negative spirit” and “the misjudgments” of the American administration.

As in past instances, Algeria’s Foreign Minister avoids answering to the “three most significant continuing human rights problems in Algeria, namely, restrictions on the freedom of assembly and association, lack of judicial independence and impartiality, and overuse use of pretrial detention.”

The report is especially embarrassing to Foreign Minister Ramtane Lamamra who was forced to blast the American’s interventionism after months of hyping his “excellent relations” with Washington.

The most troubling accusations in the Departments of State report are the assertions that “abuses by illegal paramilitary forces remain a significant problem,” and the fact that the government refuses to “investigate, prosecute, or punish officials in the security forces and elsewhere in the government who committed violations.”

Such charges are worrying since several of the high ranking military officials responsible of atrocities are still active and hold sensitive positions in the National Army and the notorious Intelligence and Security Department (DRS).

DRS operatives are apprehensive about facing future criminal charges in the International Criminal Court for abuses perpetrated against civilians during the 1990’s civil war. The 2014 Country Report specifically addresses the impunity for police and security forces.

It is ironic and disconcerting that Algeria stands accused of arbitrary and unlawful deprivation of life as its Foreign Minister uses the United Nations platform to denunciate other countries’ alleged human rights abuses. The American administration’s complains came at a time when Algerian diplomats are “lecturing” other nations about the respect of civil rights.

According to the American report, in 2014 the Algerian government restricted the freedom of speech and press and deprived some citizens of free and fair trials. The U.S. State Department asserts that “individuals were not able to criticize the government publicly and that authorities arrested and detained citizens for doing so, and citizens practiced self-restraint in voicing public criticism.” According to the same report, the government severely restricted the exercise of  freedom of assembly and association.

It is worth noting that Human Rights Watch (HRW) issued a similarly critical report in 2014 accusing the Algerian authorities of “continuing to restrict freedom of assembly and association, prohibiting meetings and protests. The Algerian government clamped down on union rights, frequently resorting to arrests and prosecutions of union leaders and activists.” HRW stated that “security forces and armed groups continued to enjoy impunity for atrocities they committed during the civil war of the 1990s.”

It is time for the Algerian Army to face its crimes against the Algerian people and stop scapegoating other nations for its shortcomings. Instead of scrutinizing its neighbor’s records, the Algerian government must answer for its misconducts.