Rabat - Dozens of Muslims and Jews gathered in Casablanca for a Ramadan Iftar in an effort to forge interfaith dialogue and strengthen ties between the sons of Abraham. 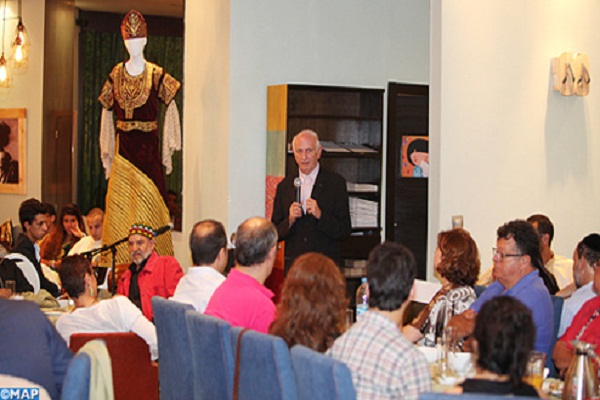 Rabat – Dozens of Muslims and Jews gathered in Casablanca for a Ramadan Iftar in an effort to forge interfaith dialogue and strengthen ties between the sons of Abraham.

The Iftar was organized on Tuesday by members of the Moroccan Jewish civil society in partnership with the Association “Marocains Pluriels” chaired by Mr. Ahmed Ghayet.

The event was attended by over a hundred guests from all walks of life to celebrate “the richness and depth of the Moroccan cultural and spiritual diversity.”

The organizers invited King Mohammed VI’s senior Advisor, Mr. André Azoulay, as a guest of honor for the Jewish-Muslim Ramadan Iftar. Azoulay, 74, who is also the president of the executive committee of the Sevilla-based Foundation for Three Cultures and Three Religions, analyzed “the historical, political and constitutional fundamentals which gave to the Moroccan exemplarity the sustainability and legitimacy around which builds and strengthens the national consensus brought vividly by the leadership of His Majesty King Mohammed VI.”

Mr. Azoulay also emphasized the structural nature of “this Moroccan reality” that should not be equated with “an economic or circumstantial reaction which finds its justification and its sole purpose in a timely response to the contemporary crisis of the Community of Nations.”

“In a world in search of landmarks, the Moroccan compass is more precious than ever,” said the King Councilor, recalling the “historical threshold crossed by our country in July 2011 with the vote on our new Constitution, which guarantees the irrefutable achievements that underpin and consolidate the diversity and social and cultural modernity of our society.”

Ahmed Ghayet, President of the Marocains Pluriels Association, said on the occasion that the meeting is an opportunity to pass on to the younger generation the idea that Morocco is a land of tolerance, inter-community dialogue and sharing. He added that the meeting also aims “to highlight to young people in particular the history of the Kingdom, characterized by the coexistence and cohabitation between Moroccans of different backgrounds and faiths.”

The event’s guest of honor André Azoulay was awarded last week the North-South Prize of the Council of Europe in Lisbon, Portugal for his contribution to the peace process in the Middle East and for the promotion of intercultural dialogue in the Mediterranean.