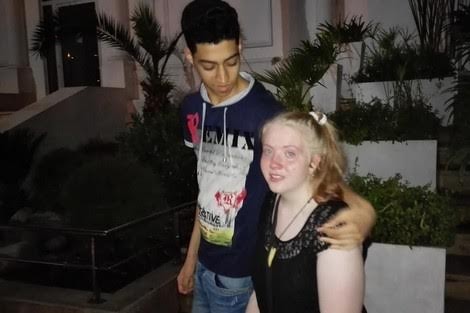 Rabat – Over the past three days the Moroccan press, mainly Hespress and Morocco World News were the first to report about what has become a very famous bilateral love story that brought two diplomatic missions on the same side.

The teenager, Rebecca Arthur, flew from JFK in New York on Monday July 6th, aboard the wings of juvenile romance! Rebecca’s journey to Casablanca announced the beginning of her one-thousand-and-one mile search for her virtual ‘pen-pal’, whom she met on Facebook.

It took Rebecca a few months to foster unquestionable trust in Mohamed Adalla, (Simo) and to build a solid relationship with her Facebook friend. That trust, we have learnt recently, was endorsed by Rebecca’s mother and evidenced by her written approval.

Conspiracy and envy were the main antagonists in Simo and Rebecca’s love story. Media outlets reported that it was Rebecca’s girlfriend who first spread the rumor of her kidnapping out of revenge and envy.

Clinton’s police, in the State of Connecticut started the search for the alleged missing girl on Thursday. With the help of the American Consulate in Casablanca, the intercontinental search led them to Essaouira where they found Rebecca safe and happy at her Moroccan host’s family home.

To bring a rapid and immediate closure to their story, the American consulate in Morocco convinced Simo to convince Rebecca to return back to Connecticut by promising to facilitate their re-union in the spring of 2016.

As this article comes to press, Rebecca should have arrived at JFK airport, having had her 15 minutes of fame. Her love story with Simo seems to be laying down the foundations of a new era for a global village where stories of ‘Transatlantic missiles’ will be exchanged with ‘transcontinental love’.