Rabat - Japan granted Morocco, on Monday in Rabat, a donation of 31 million dirhams to carry out the project of improving security equipment. 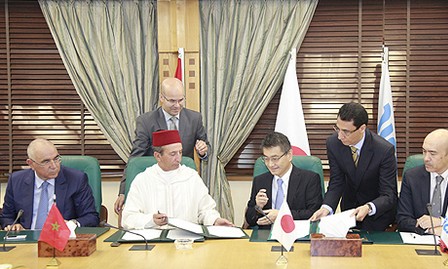 Rabat – Japan granted Morocco, on Monday in Rabat, a donation of 31 million dirhams to carry out the project of improving security equipment.

Inked by interior minister Mohammed Hassad, Japan’s extraordinary and plenipotentiary ambassador to Morocco Tsuneo Kurokaxa, and JICA resident representative in the Kingdom, this agreement is meant to reinforce the material capacities of the interior ministry through providing high-performance security and control equipment.

This funding, which is part of Japan’s non-refundable financial cooperation, is aimed at strengthening the surveillance system in the Casablanca’s Mohammed V airport.

Since its setting up in Morocco, JICA contributed to funding 34 projects in Morocco for an amount of over 2.6 billion dollars and a non-refundable financial support of 345 million dollars.