Rabat - POP UP STUDIO 2015 offers master classes in music for young, talented individuals, providing them the opportunity to meet with Moroccan music professionals and have jam sessions to benefit the participants of past POP UP STUDIO programs. 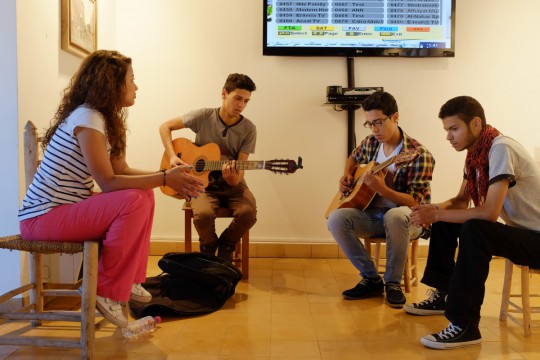 Rabat – POP UP STUDIO 2015 offers master classes in music for young, talented individuals, providing them the opportunity to meet with Moroccan music professionals and have jam sessions to benefit the participants of past POP UP STUDIO programs.

From July 23 to 25, the British Council and its partners will organize POP UP STUDIO 2015, which includes master classes and meetings with professionals that will take place on July 23 and 24 at Hiba Studio in Casablanca and jam sessions on July 25 in Dar Denise Masson in Marrakech.

The event aims to develop emerging musical talents and will serve as a platform for exchanging ideas, promoting creativity among youth, and promoting professional involvement in the event as distributers, producers, representatives of festivals, and cultural media.

The event serves to support young musicians who have limited access to professional studios for recording. It enables the participants to record, finish, and develop their music compositions written initially in Arabic or English in different music genres such as pop, rap, R&B, and others.

POP UP STUDIO was launched in 2013 in order to boost competitiveness and sustain the development of modern music in Morocco. It was initially launched as a creative residency, hosting some 30 participants who benefitted from technical and creative support for their music compositions.