Rabat - Algerian players playing for the French side of Lyon have come under fire from their fans in Muslim majority countries for choosing not to fast during the holy month of Ramadan. 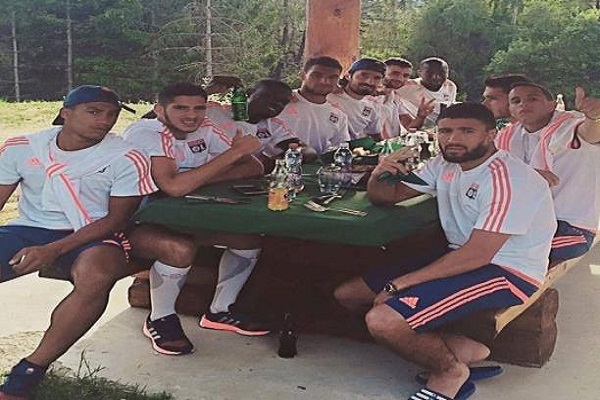 Rabat – Algerian players playing for the French side of Lyon have come under fire from their fans in Muslim majority countries for choosing not to fast during the holy month of Ramadan.

A picture making rounds on the internet of the players eating and drinking during the fasting month of Ramadan have caused uproar in social media platforms.

The picture shows Algeria players Rachid Ghezzal and Mehdi Zeffane, in addition to France-born Algerians Yassine Benzia and Nabil Fekir, enjoying food and water during fasting hours along with their non-Muslim teammates at the French side of Lyon.

In Islam, observant Muslims should abstain from food and liquids from dawn to dusk during Ramadan, but they can skip it if they are travelling or doing hard physical labor.

In the 2014 Brazil World Cup, Algerian players fiercely defended their chances against Germany in the knockout stage in spite of their Ramadan fasting.

When asked if fasting during such a high-intensity football display had affected their chances to advance to the last eight, Algeria’s goalkeeper Rais M’Bolhi said that fasting had nothing to do with the 2-1 defeat, adding that the Germans snatched the victory in the dying moments of the match.

Some Muslim players have grown accustomed to cope with the demands of the religion and the obligations of sports. However, the side effects of fasting during Ramadan, such as dehydration and increased risk of nutritional and energy deficiency, has led many coaches to rely on non-Muslim players during Ramadan.