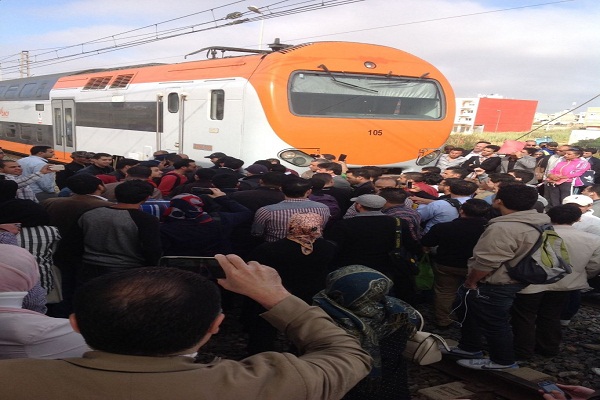 Rabat – The ONCF, Morocco’s national railway, announced in a report earlier this month that their customer satisfaction is up to 75percent. As a regular customer of the ONCF, I cannot help but be perplexed by this number.

I donot claim to be a specialist in customer behaviour and satisfaction. Nor do I believe that these numbers are wrong or falsified. But I would be interested to see how this customer satisfaction survey was conducted, because the general impressions about ONCF online are far from being positive. All you have to do is look through the #ONCFdirect tag on Twitter to see how people feel about the national rails bureau.

After the launch of #ONCFDirect by ONCF themselves, the tweets not only contained complaints about service, but also pictures.

I have been using trains on a semi-regular basis for the past three years. This is the second summer that I commute on a daily basis between Kenitra and Rabat on ONCF trains. To say that I identify with the 75 percent mentioned in the ONCF report would be a blatant lie.

I have grown used to five to fifteen minute delays in the train schedule. Friday afternoon and evening trains are especially bad. Not only are they usually very late, but they also tend to be more crowded than at other times. Of course, after you travel from Meknes to Kenitra standing up in an overflowing train next to a door that is wide open, nothing truly surprises you anymore. Add the foul smell of dirty restrooms and you’ve got yourself a quintessential ONCF train ride that many people know all too well.

Some people might bring up problems other than delays and a lack of hygiene. However, I choose to not mention other issues, because I feel that problems such as how loud some individuals can be on the phone or fights amongst passengers over seats is more about people’s lack of empathy and self-awareness in social settings than a problem that the company is responsible for.

ONCF’s services are far from being exemplary, but the fact that I take the train on almost a daily basis has also opened my eyes to the improvements they are trying to do. For example, there are hygiene workers who now regularly patrol the trains and make sure no litter is left behind. Also, during the month of Ramadan, the passengers on the trains received complementary water bottles and dates to break their fast. Whether or not these improvements are good enough to make us forget the rest of the issues is another matter.