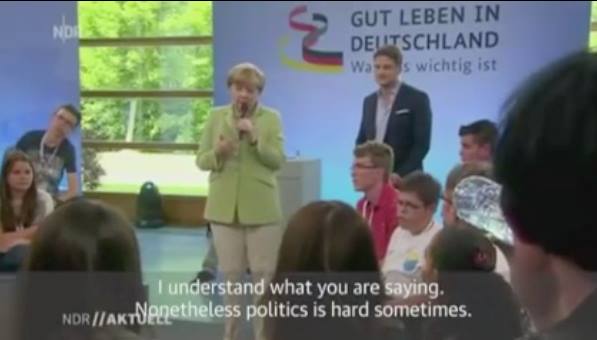 Rarely has Angela Merkel been so directly confronted with the consequences of her own politics. But an emotional encounter with a young Palestinian left her momentarily speechless and unable to adequately explain to the girl why she was going to be deported.

In a televised meeting that has gone viral, the German chancellor rubs the shoulder of a sobbing teenager after telling her she was one of “thousands and thousands” of refugees that her country was unable to help.

As the number of refugees arriving in Germany rises by the month – and already this year the number of asylum applications, at 450,000, is more than twice the total for the whole of 2014 – the issue is one of the most keenly debated topics in the country.

So it was not a surprise that it was on the agenda on Wednesday as Merkel met a group of 14- to 17-year-olds in the gymnasium of their school in the northern city of Rostock.