On the tenth of Muharram, the custom goes that women like men are on course for cemeteries to visit their deceased relatives.

El Jadida – On the tenth of Muharram, the custom goes that women like men are on course for cemeteries to visit their deceased relatives. Most passageways are lined with seated beggars stretching their hands for charitable gifts. Alms-givers are likely to offer a piece of bread and one or two handfuls of figs for each beggar.

There are visitors who prefer to take coins with them to the cemetery and tip in charity a dirham or two for a beggar. Others prepare tea or milk with coffee at home and serve them to beggars and Quran reciters closest to their relatives’ tombs.

Alms distribution in Ashura is labeled “tfriqa pl. tfariq”, a term that also refers to the ritual of alms distribution performed only by women on the third day after every burial of the dead. Whenever someone dies in Morocco, he is taken in a funeral ceremony to the burial site by males. Women are religiously banned from participating in burial rituals.

However, they are assigned by the popular tradition a special day to go to the cemetery to visit the newly buried dead. It is the third day after burial called the day of tfariq. Women go in groups to the cemetery and give charity close to the dead’s tomb wearing, like in Ashura, jellabas and scarves covering their body parts.

This separation of the sexes in the funeral ritual is not observed on Ashura. Both sexes may participate in alms-giving at cemeteries though with remarkable massive participation of women. Visitors in general stand by the burial place of their dead relative encircled by Koran reciters (tulba), beggars and boys who eke out some pennies by watering graves.

While tulba are reciting Quran, boys are washing tombs and cleaning their edges. Unwanted herbs are rent off. The bowls planted on tombs are cleaned and filled with water for birds to drink from. By the end of the ritual, the tulba lift their hands in wish prayers for the dead and are tipped some coins by the relatives. Beggars also receive their share and disperse away, each heading for another gathering surrounding another grave.

There are visitors who prefer to paint the tombs on the occasion. For this purpose, boys equipped with brushes and pots of lime smear the tombs for a price of roughly MAD 10. It is obvious that water used in cleaning tombs or paint in renewing tombs’ coating may be considered as purifying symbols. Each year (nicknamed in the popular calendar Ayshur), people desire to free the dead relatives from impurities by washing their tombs with water or applying a coating of paint.

People think that the day is a Great Day during which the doors of heavens are open to worshippers’ supplications. They become more generous and hanker after wish prayers so as to spend the rest of the year—until the coming of the next Ayshur—in rest, peace and prosperity.

The celebration of Ashura is the time for Muslims to give out to the poor and needy the orthodox tax in the form of alms known as zakat, the tenth (‘ushur, another word from which the word Ashura may be derived) of the yearly earnings on trade, harvest, cattle, and savings after one year’s possession.

One of the purposes of Ashura, therefore, is to effect individual and collective annual purification by the practice of expiation of the sins of others and by one’s reconciliation with God by way of alms-giving, visiting the dead and for some by fasting, praying and evincing sincere repentance for one’s own sins against God.

A souk is also held on the margins of the cemetery, selling different kinds of products from kitchen equipment, incense, fresh and dry fruits, toys to domestic fowls and second-hand clothes. Comic shows are organized by street comedians in halqa-s (public gatherings in the form of circles). Diviners also invite people in halqa-s to predict for them the future. Most of the activities of the souk show that it primarily attracts women.

It is also the occasion for men to prove their masculinity. To please their wives they have to shop well in Ashura. For instance, the larger quantity of dry fruits such as almonds, nuts, figs and dates they purchase, the greater admiration their wives, daughters, sisters, mothers or female in-laws foster for them.

Back to the cemetery market, let me hasten and explain that diviners in halqa-s commonly attract male onlookers from the masses of watchers. Very few females participate in such assemblies. Unlike men, they are abashed at presenting their problems in public. The halqa of a diviner (usually female) seems to be an opportunity for some to exteriorize their social problems in public and purchase the illusion of hope from the diviner who comforts them with promises of forthcoming riches.

The presence of incense-and-medical plant sellers shows that women are targeted in the souk of Ashura. They go in bulk to purchase such ingredients because it is believed that the medical or incense items obtained on the sacred day of Ashura and preserved to be used on particular occasions may have an effective influence. It is the occasion to sell scarcities in plants and incense. The souk gives us the impression that the female obsession with the power of magic to control the couple’s destiny is still alive and weighs on folk imagination. 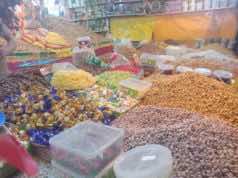 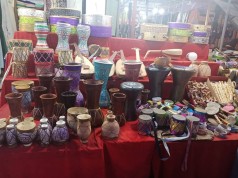 Ashura: An Islamic Festival or a Commercial Event?