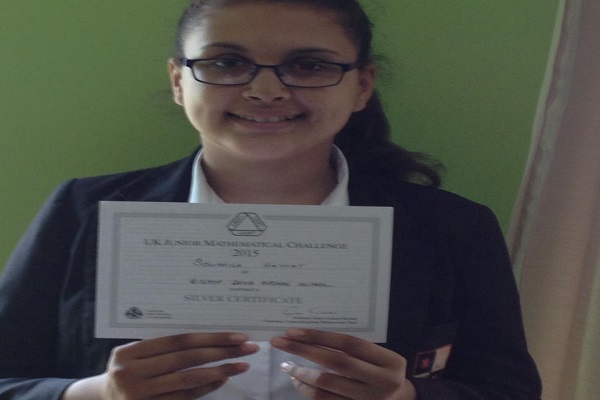 By
Larbi Arbaoui
-
Larbi is a freelance writer and assistant editor at Morocco World News.
Jul 19, 2015
Spread the love

In recognition of her outstanding performance in the mathematics competition, the Moroccan student, whose family is originally from Fez, received the silver award signed by Professor Dame Frances Kirwan, the chairman of United Kingdom Mathematics Trust.

The Moroccan student received the award for the second consecutive year.

“I am very proud of my daughter, Souhaila Hayyat, for achieving this reward for the second consecutive year,” Said Hayyat, a postman and a qualified FA football manager, told MWN.

“She wanted to be the highest educated woman and her dream is always to be an example for the other Moroccan girls,” he added.

After she has been among the highest scorers, Hayyat is eligible to participate in the Junior Mathematical Olympiad.

Designed to encourage pupils to use logical reasoning, the competition, which is aimed at pupils (Year 9 old or below) in UK, requires challengers to answer 25 multiple choice questions in one hour.

According to the competition’s official website, the challenge is taken in schools under normal exam conditions.

Moroccan students abroad are a real source of pride for their country, Morocco.

After the successful story of Myriam Bourhail, who received the highest baccalaureate exams score in France last year, Mohammed Mosdaq, a Moroccan student living in Italy, obtained a 100% score on the Esame di Stato (state exam) in Italy.