Rabat - The nightmare continues for clients of the Royal Air Maroc. After a New York-Casablanca flight was cancelled last Thursday causing people to wait for 36 hours, another flight has been cancelled. The itinerary of the cancelled flight was Casablanca to New York with a stopover in Paris.

Rabat – The nightmare continues for clients of the Royal Air Maroc. After a New York-Casablanca flight was cancelled last Thursday causing people to wait for 36 hours, another flight has been cancelled. The itinerary of the cancelled flight was Casablanca to New York with a stopover in Paris.

According to a Moroccan passenger who was supposed to travel along with her two children onboard RAM flight AT 0786 on August 25th, their flight was cancelled.

“Royal Air Maroc just cancelled our trip back to the States,” a person who asked not to be named posted on her Facebook account. 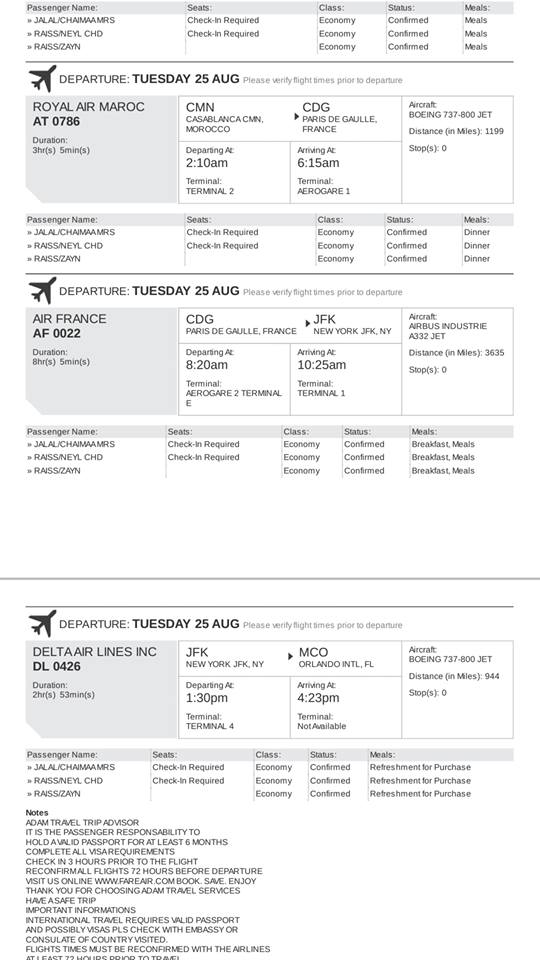 The same person told Morocco World News that her flights scheduled to depart on August 25th from Casablanca to Paris onboard RAM with a connecting flight from Paris to New York onboard an Air France flight was cancelled.

The company told its customers they could choose to take the flight scheduled for August 24, but they would be on standby. Furthermore, the company said they would not provide any hotel compensation to their customers with a connecting flight in Paris.

When the person asked the company about the accommodation in Paris for August 24 night, she was told that she would have to pay for her own accommodation.

In addition to canceling the flight on August 25th, RAM also cancelled the flight of August 15th.

What many Moroccans living abroad describe as “lack of professionalism and respect from RAM officials” towards their customers, has been aggravated by a glaring lack of timely communication from the company.

The new series of cancellations that occurred since last week prompted a number of Moroccans living in the US to create a Facebook page that calls for the boycott of Morocco’s state-owned carrier.

Venting his disappointment at RAM’s repetitive failure to provide their customers with decent service, Abdelbasset Zaghdoud, a Moroccan-Dutch who often travels with RAM, supported the idea of boycotting the company. He emphasized that this is the “only way” RAM would be forced to treat their customers with respect.

“RAM owes much to the Moroccans abroad, who provide a steady stream of income throughout the year with peak times during the holidays. However, if we are just seen as “current wallets”, then the only way to bring them to an understanding and reconsider their acts, is to refrain from traveling with RAM, until prices are reasonable for everyone and the service is optimized,” he said.