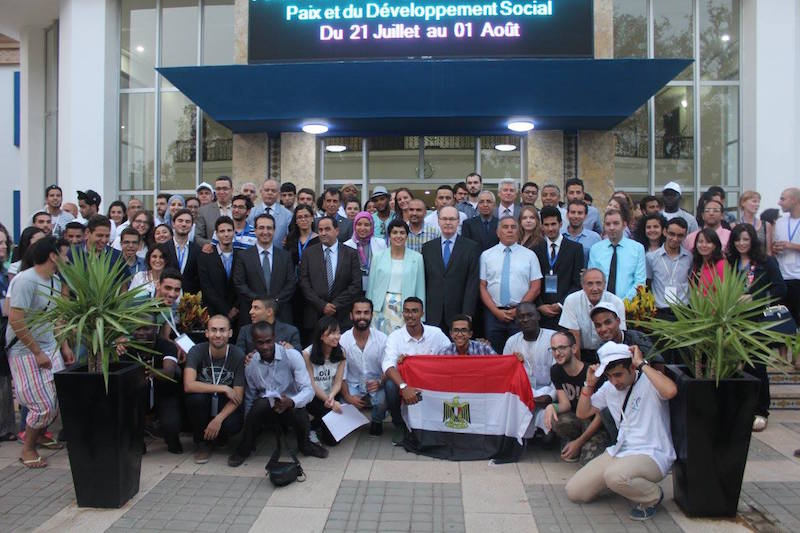 Kenitra – The Global Summit on Peacebuilding and Social Development kicked off tonight at Ibn Tofail University in Kenitra. The twelve-day program brings Moroccan youth together with young people from all over the globe to formulate a vision of a peaceful and prosperous world.

According to Maroua El Hani, public relations manager for the conference, the idea for the summit originated with the Unit of University Leaders of Dar Lekbira. Since 2012, this group of university students has volunteered at Dar Lekbira, an association that serves children and families in difficult situations, and has run several camps focused on community building. Broadening their scope to a global level for the current project, the organizers, spearheaded by Mr. Akram Cheggari, invited young leaders like themselves from many different nations and cultural backgrounds to share ideas and best practices for fostering community development, peace, and tolerance. The aim is not simply to hold a conference but also to generate actionable ideas and an effective network for developing grant projects regionally and internationally.

Although similar conferences have been held in many places around the world, this is the first time that a meeting on the subject of peacebuilding and social development has taken place in Morocco. Interspersed among the presentations and workshops will be excursions in the region which will introduce attendees to the rich history, craft heritage, and natural beauty of Morocco.

The attendees have been gathered from over thirty countries in Northern and Subsaharan Africa, the Middle East, Eastern and Western Europe, and Asia. In addition, a dozen or so volunteers from the United States, all of whom are currently living in Morocco and working with Moroccan youth, are on hand. Organized by fellow volunteer Nicholas Rees, the Americans will have the opportunity to mingle with these dynamic young leaders and will assist the conference organizers by facilitating small-group discussions following the formal presentations. Throughout the conference, participants will be working toward developing a charter of principles of peace, tolerance, and co-existence, from the perspective of international youth. After the summit, these positive messages of peace will be disseminated via various social media channels to all the summit stakeholders in order to create a truly global impact.

Attendee Gehad Sebah, a 21-year-old student at Egypt’s Arab Institute of Science and Technology, said that he was attracted to Morocco because it is a confluence of Arabic and European cultures. A practitioner of judo, he has made many Moroccan friends through international competitions and is delighted to be here in person to experience the country’s multi-faceted history and culture. Another participant, Prince Annor, a 24-year-old from Ghana who is currently studying economics at Ibn Tofail, is enjoying the interaction with people from so many different countries. Like most attendees, he hopes to learn more about bringing peace to the world.

The opening ceremony included speeches by Mr. Akram Cheggari, Event Manager; Mrs. Zineb El Adaoui, Governor of Gharb Region and Kenitra Province; Mr. Azeddine El Midaoui, President of Ibn Tofail University; and Mr. Taoussi Zin Albedine, President of Dar Lekbira Association. The Governor, a strong supporter of the summit, stressed the critical role of peace in human development, as well as the emphasis placed by Islam on peace and understanding among people of all faiths and nationalities. Formal sessions will begin tomorrow, and the summit will run through August 1.