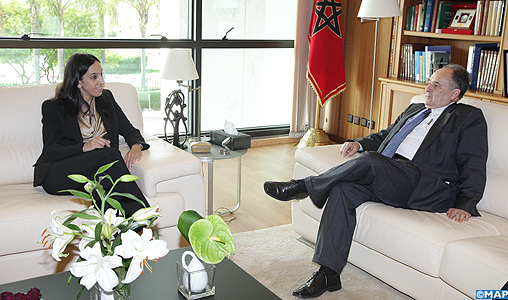 During this meeting, Bouaida expressed her thanks to the senator of the Democratic Labor Party (DLP, a member of the Socialist International) for his personal commitment to strengthening ties of friendship and cooperation between Morocco and Brazil.

The Minister recalled that Morocco has a special interest and a marked priority to strengthening cooperation in all areas of common interest with the countries of Latin America in general and Brazil in particular, particularly in the context of South-South cooperation, which crystallizes reconciliation with the peoples of Latin American countries.

Regarding the Moroccan Sahara, Bouaida informed the Brazilian MP on the latest developments on this subject, focusing on the efforts of the Kingdom in favor of a negotiated and realistic political solution, based on the parameters set by the relevant Security Council resolutions.

In this respect, the minister noted the importance of the Brazilian support to the Moroccan autonomy initiative which constitutes a credible and realistic solution.

For his part, Buarque, also former Minister of Education under President Luiz Inacio Lula da Silva and former governor of the Federal District of Brasilia (1995-1998), praised the excellent relations between the two countries, recalling in this regard, his country’s resolve to promote and strengthen bilateral cooperation.