Rabat - A crowd of around 700 people gathered in an old industrial warehouse on Saturday night in Detroit, USA for the unveiling of the controversial satanic statue, which depicts a goat-headed satanic idol named Baphomet. 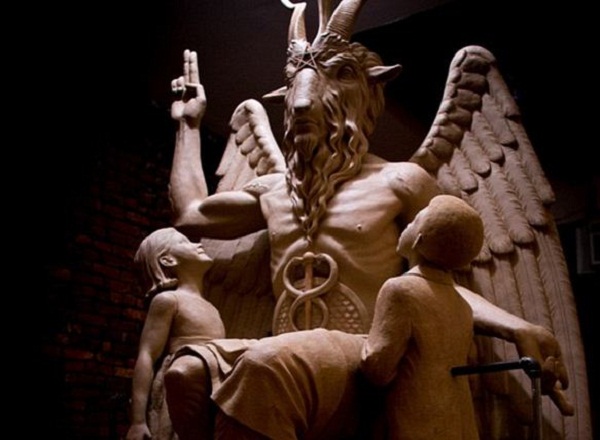 By
Katherine Hall
-
Katie Hall is a student at University of Wisconsin-Madison studying journalism and french.
Jul 27, 2015
Spread the love

Rabat – A crowd of around 700 people gathered in an old industrial warehouse on Saturday night in Detroit, USA for the unveiling of the controversial satanic statue, which depicts a goat-headed satanic idol named Baphomet.

The statue is made of bronze, nearly 9 feet tall and weighs 2,000 pounds.  The statue depicts a young boy and girl gazing up at the goat-headed figure who is seated upon a throne.

Attendees were told that the event was the “largest public satanic ceremony in history.”

Around 100 protesters gathered in opposition of Baphomet’s public revealing on Saturday in front of where the Satanic Temple had originally planned to display the statue.  The actual location of the revealing was moved after the group’s initial venue canceled after local religious groups protested.

Lines forming outside 5001 grand river #detroit for the unveiling of the Satanic baphomet statue pic.twitter.com/yiEQJcdJV7

“Satan has no place in this city, or any other city,” one protestor, James Bluford of Rochester Hills, stated.

Satanists want to build a satanic church in Detroit with the statue of the Baphomet… but Christians wanna stop them. Hypocrites. — Laith Hakeem (@PharaohLaith) July 23, 2015

Temple spokesman, Lucien Greaves, explained in a statement that the statue would serve “as a beacon calling for compassion and empathy among all living creatures.”  He added that it would also have a certain “functional purpose” – as a chair where “people of all ages may sit on the lap of Satan for inspiration and contemplation.

During the ceremony, “dark punk” bands and DJs performed from a stage, and Satanic Temple officials delivered speeches.

The Baphomet statue was intended to stand alongside the Ten Commandments statue in Oklahoma, however the state Supreme Court ruled that the government grounds could not be used to support any kind of religion.

While the final destination for Baphomet remains undecided, the director of the Satanic Temple Detroit chapter, Jex Blackmore, said group members plan to transport the sculpture to Arkansas.  Until then, the statue will be stored away from the public eye.