Rabat - Moroccan social media users call for cutting the hands of a thief who was on camera robbing a car in Casablanca on Saturday. 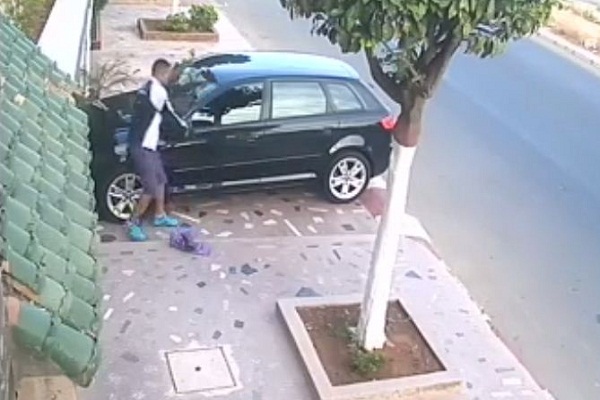 Rabat – Moroccan social media users call for cutting the hands of a thief who was on camera robbing a car in Casablanca on Saturday.

Moroccan social media users are hoping surveillance video will lead to arrest of a suspect who appears to be stealing side mirrors from a car in broad daylight in Casablanca.

In the video, which was posted on Facebook on Tuesday, the thief looks left and right to make sure the place is clear, and then walks slowly toward a black car parked near a house. He was clearly unaware of the surveillance camera.

The thief tried to remove the left side mirror with his bare hands, but he failed. Still, he did not give up.

He disappeared for a couple of minutes before he came back holding a bag in his hand. He opened the bag, removed a screwdriver, and used it to remove the left side mirror and then the right side of mirror.

The video went viral on Facebook, creating a wave of outrage among social media users.

Several Moroccans social media users called for the thief’s hands to be cut off, arguing that the rules of Sharia (Islamic law) should be inflicted on him.

“Cutting off the hand of the thief this is the only solution, for prison be useless with him,” said one commenter. Surprisingly, this is the most liked comment.

“The law of God should be inflicted on this thief by cutting his hands. He neither does not benefit society  all he does is sabotage it and behave like animals,” said another commenter.

Another social media user commented on the video, saying: “If this thief was arrested, the law of God should be inflicted on him by cutting his hands.”

“He does his disgraceful misdeed with dedication and ease, as if the area was deserted. This is a thief who vandalizes the property of others and a creature that is not valid for the community. His hands must be cut,” another commenter said.