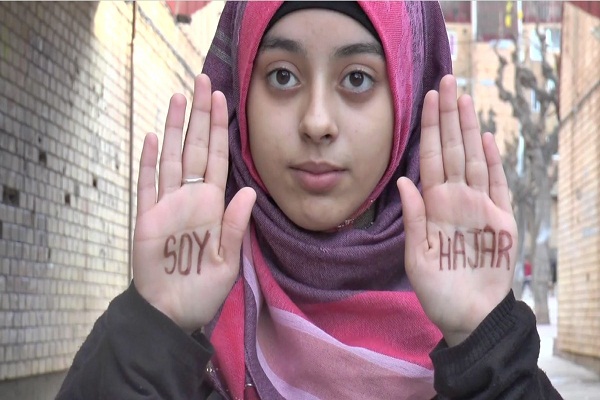 By
Karla Dieseldorff
-
Karla is an award-winning actress and producer.
Jul 29, 2015
Spread the love

Hajar is now considered a role model. The Columbares Association nominated Hajar in this national competition. Columbares explains on their Facebook page why they chose her. The Association developed a project in 2014 to facilitate effective integration. Hajar stood out for her commitment to support multiculturalism and the coexistence of diverse communities in Los Rosales.

Hajar narrates in writing how her family emigratedfrom Oujda, Morocco into Spain. Her touching essay recounts the obstacles she had to overcome to be accepted in Los Rosales and how she became a symbol of integration. She and her family encountered many difficulties as immigrants in Spain. Her narrative moved the members of the Columbares Association.

According to a report by Yabiladi News, Columbares expressed they were in awe that “such a young person could have such clear ideas both for her community and for her integrative personality”.

The Association has a communication campaign called ‘Los Rosales, a neighborhood in El Palmar’ in the Murcia region. Hajar has also contributed to this project with her narratives where she describes the daily life of the residents of such neighborhood. Her narratives have such powerful effect, that the campaign has succeeded in spreading a positive image of the area.

It is reported that Columbares sees this “as recognition of the work for the integration of Hajar, but also as a way to work towards coexistence between different cultures”.

The project is funded by the Fund for Asylum, Immigration and Integration of the European Union as well as funding from the Ministry of Employment and the Spanish Social Security.

Diversity and multiculturalism can enrich a neighborhood by integrating a full of range of capacities and resources. It is imperative to communities and it maximizes growth in all areas. We must be receptive to different ideas in order to coexist in peace and respect.