Casablanca  - Morocco intends to contribute in the Africa50 fund with an amount of 100 million dollars and give it all facilities necessary to fulfill its mission, said, on Wednesday in Casablanca, economy and finance minister Mohammed Boussaid. 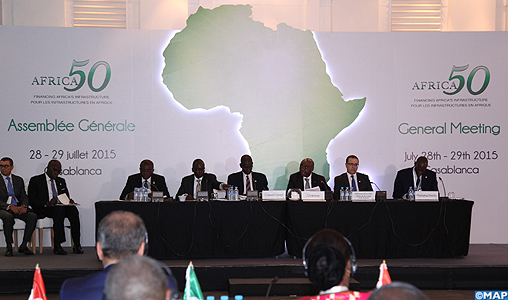 Casablanca  – Morocco intends to contribute in the Africa50 fund with an amount of 100 million dollars and give it all facilities necessary to fulfill its mission, said, on Wednesday in Casablanca, economy and finance minister Mohammed Boussaid.

Speaking at the constitutive general assembly of the Africa50 fund, set up initially by the African development bank (AfDB), in the presence of ministers representing member states, Boussaid noted that this commitment by Morocco seeks to promote cooperation within Africa, recalling on this occasion the different tours by HM King Mohammed VI which were marked by the signing of several cooperation agreements.

Morocco commends again the AfDB’s decision to establish the Africa50 fund in “Casablanca Finance City” and reiterates his pledge to take all measures to facilitate the fund’s job in the best conditions and ensure its success.

This initiative was ratified by African finance ministers, AfDB governors, in Marrakech in May 2013 during the bank’s yearly assemblies.

Boussaid also underlined Africa’s pressing need for infrastructure for which only 4% of the GDP is dedicated. The need of African countries in this area is estimated at 100 billion dollars annually, but only 45 billion dollars is mobilized by African governments, he said.