Rabat - Early on Friday, an 18-month-old toddler wasburned to death in a suspected arson attack in Duma village, south of Nablus city, in the occupied West Bank. The attack is believed to be carried out by Jewish terrorists. 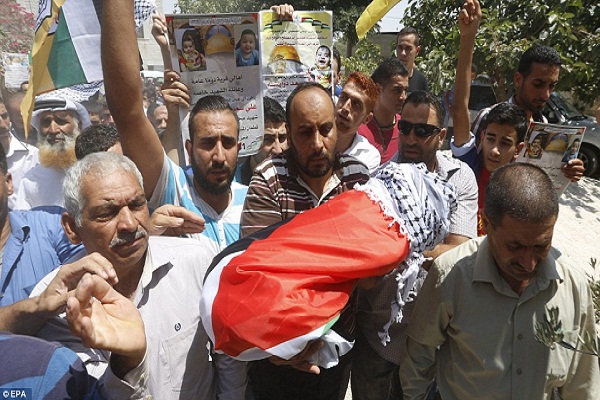 Rabat – Early on Friday, an 18-month-old toddler wasburned to death in a suspected arson attack in Duma village, south of Nablus city, in the occupied West Bank. The attack is believed to be carried out by Jewish terrorists.

The child’s parents and his four-year-old brother were also injured in the attack. The father reportedly saved his wife and the 4-year-old, but couldn’t make it to the baby, who was identified as Ali Dawabsheh.

Reuters quoted eyewitnesses as saying that attackers smashed the house’s windows and threw fire bombs inside shortly before dawn, while the family was asleep.

“I never imagined that this could happen, that someone could come and burn people alive while they are sleeping,” said Hassan Dawabsheh, the slain child’s uncle.

“’I don’t know what those people were thinking. What do they have inside their hearts and minds?” he wondered.

According to haaretz, the attackers wrote a slogan used by Israeli extremists on the walls of the home. They spray-painted the words “revenge” and “long live the Messiah” on the walls.

This barbaric attack has been described by Israel’s Prime Minister Benjamin Netanyahu as “terrorism.” “This is an act of terrorism in every respect. The State of Israel takes a strong line against terrorism regardless of the perpetrators,” Benjamin Netanyahu said in a tweet.

PM: This is an act of terrorism in every respect. The State of Israel takes a strong line against terrorism regardless of the perpetrators.

The Israeli army issued a statement saying that theyboosted forces in the area to search for the suspects, described as “two masked terrorists”, and to prevent any escalation in violence.

Israeli DefenseMinister Moshe Yaalonsaid Israel would not allow ‘Jewish terrorists’ to carry out such acts.

“We will not allow Jewish terrorists to harm the lives of Palestinians in Judea and Samaria,” he said in a statement, referring to the West Bank by its biblical name. “We will fight against them firmly and with all means and tools at our disposal.”

However, the Palestine Liberation Organization (PLO), which dominates the Palestinian Authority in the West Bank, said it held the Israeli government “fully responsible for the brutal assassination” of the child, Ali SaadDawabsha.

This is the worst attack by Israeli terroristssince a Palestinian teenager was burned to death in Jerusalem a year ago.